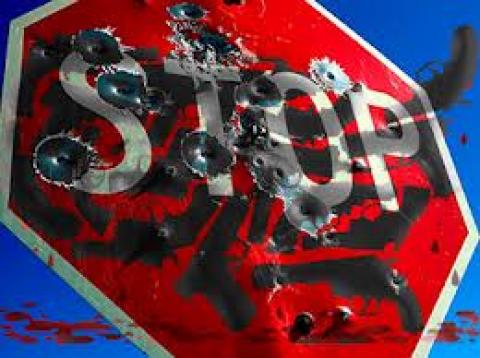 Maryknollers around the world are all too familiar with the impact of gun violence. Internationally, small arms kill as many as 1,000 people each day. Millions more are wounded, or their lives upended when access to development aid, markets, health, education and human rights is disrupted by people with guns. Seventy five percent of more than 875 million firearms in the world are in the hands of civilians. Each year about eight million new small arms and 10 to 15 billion rounds of ammunition are manufactured, making available enough fire arms and bullets to shoot every person in the world twice.

Maryknoll has been working with the Control Arms Campaign to call on the United Nations to agree to a legally binding global agreement that will ease the suffering caused by irresponsible transfers of conventional weapons and munitions. The United States can play an important role in securing a “bulletproof" Arms Trade Treaty through its positive participation in the UN process and by reforming gun laws in the United States that have claimed far too many lives.

On Monday, Feb. 4, people of faith in the U.S. are asked to contact their members of Congress and urge the following:

Learn more about the call-in day at the Faiths Calling website.

The time is always right to do what is right - #MLK. Join me Feb 4 & call on Congress to #endgunviolence #faithscalling http://faithscalling.org

Save lives and #StopGunViolence. Join the #interfaith call-in day to prevent #gunviolencehttp://faithscalling.org

Just called my U.S. senators & rep to give a faith perspective on why I #DemandAPlan to prevent #gunviolence. Join me - http://faithscalling.org

Every day, an average of 33 people in the United States are killed by gunshot wounds. Because I have faith in a safer future, I'm joining the Gun Violence Prevention Interfaith Call-in Day. Please join me in calling Congress. Learn how at http://faithscalling.org

Our bodies are temples of the Holy Spirit, yet an average of 33 bodies are laid to rest each day because of gunshot wounds. Congress needs to hear our faith voices on the need to better protect all God's children. Please join me in calling Congress. Learn how at http://faithscalling.org

Tell your members of Congress: Gun Violence Prevention is a racial justice issue. According to Children's Defense Fund, in 2010, 45 percent of deaths and 46 percent of injuries were among Black children and teens, who constituted only 15 percent of all children and teens. Work and pray for a safer future and CALL TODAY: http://faithscalling.org