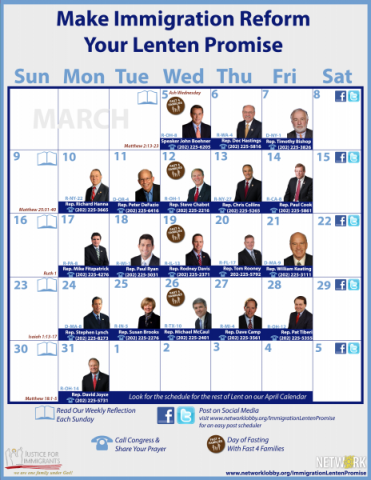 In collaboration with the Justice for Immigrants (JFI) campaign of the U.S. Catholic Conference of Bishops, the Maryknoll Office for Global Concerns urges you to take action for immigration reform during Lent 2014. The members of the JFI coalition have created a toolkit, available in PDF format here at the bottom of the page, which includes 40 days of strategic, coordinated prayer and action.

NETWORK Lobby is offering a weekly email based on this toolkit; sign up for these emails on NETWORK’s website.

Every Monday through Friday, we are asked to pray for a specific Catholic member of Congress. From April 14-18, we pray for Ed Royce (R-CA-39), Dan Maffei (D-NY-24), Leonard Lance (R-NJ-7), and Chris Gibson (R-NY-19); on Good Friday, please call your own member of Congress.

Call them at the numbers listed on the Lenten calendar, or use the Congressional switchboard, (202)224-3121.

Here’s a sample script: “My name is (NAME). I am calling to encourage you to embrace the position of Catholic groups across the country, including the U.S. Conference of Catholic Bishops, to support immigration reform that includes citizenship. I hope that Rep. ________’s Catholic faith will inspire him/her to be vocal in support of immigration reform. Our faith calls us to welcome the stranger, and respect the rights and dignity of all. Immigration reform that includes citizenship and protects family unity upholds our faith values and will benefit the 100 percent.”

Here are some sample tweets and Facebook posts for you to use:

Why immigration reform must include a path to citizenship

From the U.S. Conference of Catholic Bishops Justice for Immigrants Campaign

• An immigration bill that does not provide a path to citizenship but simply legal status to the 11 million would sanction a permanent underclass in our society, with one portion of the population without the same rights as the majority. As U.S. history has informed us, this is a recipe for social unrest and potential exploitation of a minority population, contrary to the founding ideals of the republic. It would keep a large group in our country disenfranchised, unable to petition their government as the majority can and unable to choose their leaders.

• Citizenship provides full protection from deportation. Under current law, a person can be deported for a wide variety of nonviolent offenses, such as drug possession, petty larceny, or fraud, even if they are permanent residents with a green card. With citizenship, the federal government cannot deport a person from the country, away from their family and livelihood. Thus, anything less than citizenship would subject a portion of the population to penalties not applicable to the majority.

• Citizenship confers full membership in our society and provides full protection from our government against foreign actors. For example, a U.S. citizen can receive protection from the U.S. government overseas in a crisis situation, or from requests from a foreign government for extradition. U.S. citizens also can travel more freely, as they are able to use a U.S. passport and thus gain admittance to other countries without needing a visa.

• A path to citizenship would ensure those who earn their citizenship are good citizens. If they are willing to meet all the requirements to become a U.S. citizen, then they certainly will appreciate being U.S. citizens and contribute to their new nation. Are these not the type of citizens our government would want? It also would ensure that immigrants take pride in their new country and are socially accepted in our culture.

• A path to citizenship would not be an amnesty, as many would argue, but would require immigrants to earn their way and pay restitution for their illegal presence. They also would have to learn English and work.

• Providing citizenship to immigrants does not mean they would vote for one party over another. Immigrant populations are just like any other group of persons, and have a wide range of political views and loyalties.