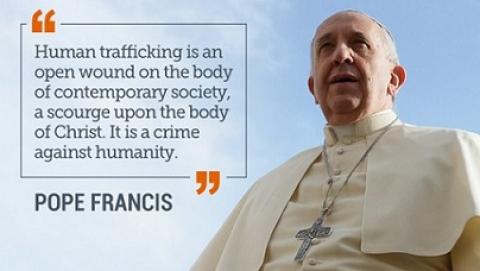 Pope Francis has highlighted human trafficking as a specific form of violence that has followed both climate change and the drug trade.

In June, the media confirmed 139 mass graves in “trafficking camps,” forced labor at sea, and trafficking of Burmese Rohingya Muslims through the southern jungles of Malaysia. This appalling tragedy should have solidified Malaysia’s Tier 3 status in the annual Trafficking In Person (TIP) report published by the U.S. State Department.

But when the U.S. State Department released the 2015 TIP report in July, Malaysia had been upgraded to Tier 2.

Politics should not trump human rights.

Now, there is a resolution before Congress – H.R. 65, known as the “Malaysia trafficking resolution” – to express “the sense of Congress that the 2015 TIP report should have placed Malaysia in Tier 3.”

Click here to ask your member of Congress to co-sponsor this resolution.

Together we can end modern-day slavery. Thank you!