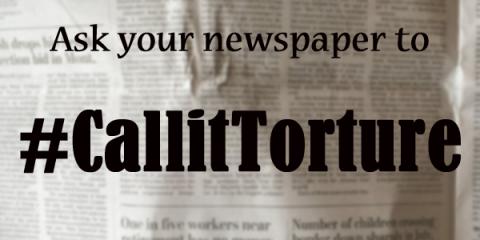 The following alert is circulated by our colleagues with the National Religious Campaign Against Torture  (NRCAT):

In the midst of the debate over the redactions to the Senate Intelligence Committee’s CIA torture report, we are happy to note a major victory that is a long time coming.  The executive editor of the New York Times announced [on August 7] that after internal discussions about the use of the term torture, “The Times will use the word ‘torture’ to describe incidents in which we know for sure that interrogators inflicted pain on a prisoner in an effort to get information.” The New York Times is finally ending the common practice of using the euphemisms enhanced interrogation methods or brutal interrogation methods and calling “the intentional infliction of pain to make someone talk” what it truly is: torture.

Ask your newspaper to do the same.

Through the NRCAT 50-state op-ed project last year and your countless letters to the editor and op-eds urging release of the torture report, the faith community has played an important role in ensuring that the CIA’s interrogation program is called what it was: torture.

You can help keep the momentum going:

2. Use our sample tweets to tweet at your newspaper asking them to #CallItTorture.

Thank you for helping ensure that news outlets do not perpetuate these euphemisms that are used by torture apologists to deceive the public and condone torture,