Sign Pledge to Stand in Solidarity with People Seeking Asylum 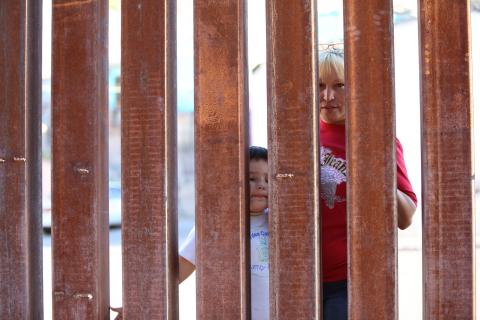 Seeking asylum is a human right.

On November 5, in response to President Trump’s announcement that he intends to block access to asylum for all vulnerable families who cross between ports of entry and indefinitely detain migrant families, 570 faith leaders and 145 faith-based organizations across traditions delivered a letter to all members of Congress denouncing these proposed illegal policies and expressing unequivocal support for the caravan of people seeking protection from violence in Central America.

"We call on Congress to reverse course and see that the U.S. complies with its own laws and international obligations to welcome those seeking protection," the letter stated.

Read the full letter and see the list of signatories here.

That same day, the leadership of the four organizations that share the Maryknoll name, the Maryknoll Sisters, Maryknoll Fathers and Brothers, Maryknoll Lay Missioners, and Maryknoll Affiliates, released a joint statement calling on the leaders of the United States to respond to the needs of the migrants on the caravan "with compassion and dignity worthy of our nation."

As a community of Catholic men and women with a long history in Central America, the leaders of Maryknoll said they feel "profoundly close to these sojourners" and "unequivocally reject President Donald Trump’s characterization of the caravan as an 'invasion of our country.'"

Read the Maryknoll leadership statement on the migrant caravan

On November 8, The Trump administration issued a new rule designed to prohibit migrants who cross the border outside of designated entry points from seeking asylum in the United States. The law is clear, however: people can apply for asylum whether or not they’re at a port of entry, and regardless of their immigration status. The measure is almost certain to face legal challenges.

Join people of faith and conscience in a pledge to stand in solidarity with people seeking refuge.

Speak Truth: I pledge to speak the truth about our human family fleeing danger and reject the dishonest and xenophobic narrative would have me view them as a threat;

Accompany: I pledge to physically accompany those who are seeking safety in the United States OR I pledge to support the people in my community and at the border who are accompanying asylum seekers;

Advocate and Organize: I pledge to take action and hold elected leaders accountable for dehumanizing those seeking protection from persecution and violence. Alongside community members, I pledge to include and advocate for immigrant families and individuals in my community. #CaravanPledge

Photo: Woman and child stand on the Mexico side of the boundary fence in Nogales, Arizona in 2016 by Archdiocese of Boston and available on Flickr, creative commons 2.0..