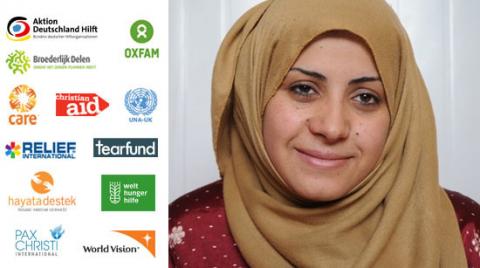 “My name is Liqaa’. I had to flee from Syria and leave behind my home, my family, my life. I am eight months pregnant and live with my husband in Zaatari refugee camp. Our children are crying for peace, but I don’t want mine to have to cry for it. We’ve shed enough tears and blood already. What we need is an end to the suffering. That is my dream.”

Politicians pledged to help find a political solution to the Syria crisis back in May – but the peace talks they promised have been delayed. At the G8 Summit in Northern Ireland, world leaders re-committed to this but did not put a clear timeframe in place.

Please urge President Obama and President Putin to put their differences aside, and throw their political weight behind making the peace talks a reality, and a success. As organizers of the peace talks, the Presidents must work together with all parties to the conflict to urgently finalize a timeline. Failure to do so will mean yet more bloodshed and suffering for millions of Syrians.

The conflict has already claimed at least 93,000 lives. The number of people just like Liqaa’ who are fleeing violence and needing humanitarian aid is rising every day.

There will be no end to the suffering unless real progress is made soon.

1. Russian President Vladimir Putin, US President Barack Obama and UN/League of Arab States Envoy to Syria Lakhdar Brahimi must use their political influence to get all parties to the Syria conflict around the table for talks on finding a solution to this crisis.

2. For talks to be a success, they must include representatives of the peaceful majority of Syrians, including women’s groups and refugees, who want this nightmare to end.

3. The talks should be backed unequivocally by the international community, who must refrain from any acts or statements which risk undermining them.

Meanwhile, world leaders must do everything they can to ensure that all people affected by the crisis can access the humanitarian aid they so urgently need.

Please sign the petition now. It will be delivered to President Putin and President Obama, and copied to the UN/LAS Envoy to Syria and G8 leaders, and will call on them to work with all parties to the conflict to make the peace talks a success.