Sign letter of conscience to Secretary of Agriculture Vilsack 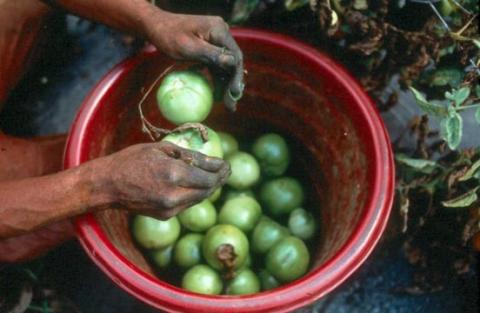 Human trafficking in U.S. agriculture remains a terrible scourge in this country. One positive response is the Fair Food Program, “a unique farmworker- and consumer-driven initiative consisting of a wage increase supported by a price premium paid by corporate purchasers of Florida tomatoes, and a human-rights-based Code of Conduct, applicable throughout the Florida tomato industry,” according to the Coalition of Immokalee Workers (CIW). “The price premium and the Code of Conduct, which were developed by tomato workers, growers, and corporate buyers in a groundbreaking collaboration, form the foundation for a new model of social accountability.”

In November, the President’s Advisory Council on Faith-Based and Neighborhood Partnerships lifted up the Fair Food Program as a powerful model for addressing human trafficking here in the U.S. As such, a variety of faith-based groups are using the opportunity to ask the U.S. Department of Agriculture to embrace this model and purchase tomatoes for school lunches and market stabilization through the Fair Food Program.

Interfaith Action of Southwest Florida, in support of the CIW, has asked for signatures on a letter to be sent to Secretary of Agriculture Tom Vilsack, urging him to take action on this initiative.

The letter begins: “On this 150th anniversary of the Emancipation Proclamation we remember our nation’s courageous ancestors who denounced slavery, resisted its practices and devoted themselves to creating structures of commerce that upheld the human rights and dignity of all people. Advances that had been unimaginable became possible because of the creativity and perseverance of slaves, abolitionists and key government leaders. The work of freedom takes all of us; and it is ongoing.

“Though enormous strides were made, the scourge of slavery has persisted, despite its illegality, in different forms, including in the agricultural fields of the United States today. Since 1997, Florida agriculture itself has seen nine prosecutions of cases of forced labor, involving over 1,200 people.

“Modern-day slavery in Florida agriculture cannot be understood in a vacuum. It is not separate from the past, rather its roots extend deep into the state’s history of farmworker poverty and powerlessness …”

Click here to read the entire letter and add your signature.