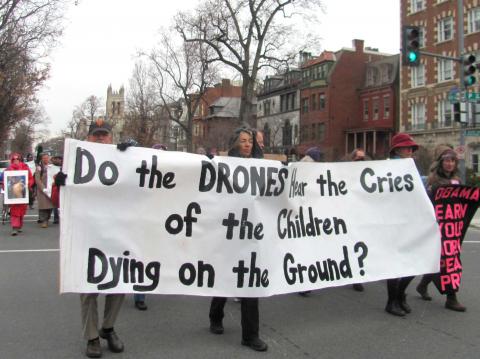 Pax Christi Metro DC-Baltimore (PCMDC-B) has crafted a sign-on letter which is scheduled to be published in the August 3 edition of the National Catholic Reporter. The text of the letter is posted below and is attached in PDF format. (A sentence might be added to tie-in the Hiroshima and Nagasaki bombings since the NCR edition will cover the annual remembrances of those tragic events.)

PCMDC-B invites all Catholics to sign this letter and to contribute $20 to its publishing cost.

To add your name to the ad, please pay by check, mailed to the PCMDC-B office, or pay online at the PCMDC-B website:

We decry our government’s use of unmanned aerial vehicles (drones) as the new face of war.

Drone killings in countries with which we are not at war—including Pakistan, Yemen, and Somalia—violate international law.1 The intended targets may be alleged "militants," but the victims have included hundreds of innocent men, women, and children.2 We are particularly dismayed at reports that the U.S. has used secondary strikes ("double taps") to kill rescuers responding to initial drone strikes and people attending the funerals of drone victims.3

Drones terrorize the communities over which they hover, with residents never knowing when or where a deadly attack may come.4 And by inflaming the local population, drone killings serve as a potent recruiting tool for extremists.5 They perpetuate violence, rather than deterring it.

The President has made clear his intention to continue using drone strikes, which he claims are legal and moral.7 They are neither. We urge our fellow Catholics and the wider faith community to join us in calling for an immediate end to the use of armed drones. Write your elected officials, telling them to end drone warfare now!