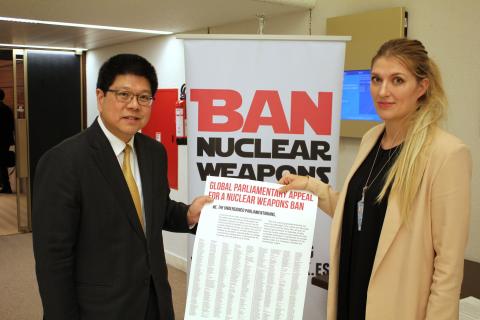 Today, January 22, we celebrate the entry into force of the UN's Treaty on the Prohibition of Nuclear Weapons (TPNW), following its ratification by over 50 nations and having been signed by 80 nations. While the U.S. has not ratified the treaty, this is a momentous day, as ratification of this treaty will help the global abolition of nuclear weapons become a more prominent goal in the international community. As of today, the use and possession of nuclear weapons is against international law.

On this day of celebration, we invite you to pray, study, and act on how push forward in our goal of a world free of nuclear weapons, a goal shared by Pope Francis.

Pray these prayers from the U.S. Conference of Catholic Bishops from the anniversary of the Hiroshima and Nagasaki nuclear bombings.

Pray the prayer from Pope Francis on this two-pager on nuclear disarmament.

Read a statement by Catholic leaders, including Maryknoll leadership, on the TPNW.

Read and watch a short video about the TPNW from the International Campaign for the Abolition of Nuclear Weapons (ICAN).

Read about the Church's teachings on nuclear weapons.

Explore these resources from Pax Christi USA on today's celebration.

Take action: Urge President Biden and the new Congress to keep the U.S. advancing toward the goal of a nuclear-free world.

Take local action against nuclear weapons through the Back from the Brink campaign and the ICAN Cities Appeal.

Explore this page of resources from the Oak Ridge Environmental Peace Alliance for more action opportunities, including writing a letter to the editor.