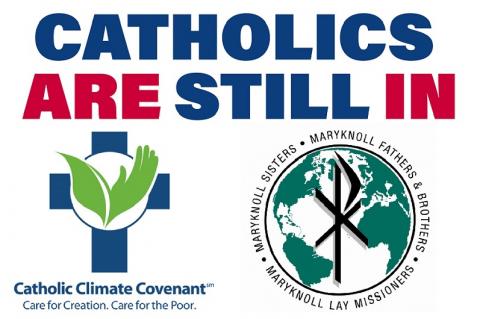 One year ago, President Trump announced his plan to withdraw the United States from the Paris climate agreement – a landmark global agreement that provides a framework for each country in the world to do its part to limit global warming by reducing greenhouse gas emissions and to help those countries most vulnerable to climate change.

The United States – one of the largest producers of greenhouse gas emissions in the world – needs to do its part.

That's why many people of faith and leaders of businesses, universities and local, state, and tribal governments across the United States have joined the “We Are Still In” campaign. In solidarity, the Maryknoll Office for Global Concerns has signed a declaration with other Catholic institutions to announce that “Catholics Are Still In.”

These pledges have already encouraged local and state climate policies, increased climate finance from individuals, corporations, and local governments, and spurred commitments from religious institutions and individuals like you. We have also managed to protect funding for some climate change initiatives in the U.S. budget through our faithful advocacy with Members of Congress. But there is much more to be done.

On this anniversary we invite you to:

Reflect:
What can you, your congregation or religious institution do to further commit to addressing climate change? Here are "10 Ways Your Parish Can Make a Difference" offered by the Catholic Climate Covenant.

Act:
First, ask the leader of your Catholic institution (parish, school, hospital, university, religious order, etc.) to sign the Catholics Climate Declaration that says "Catholics Are Still In." Deadline for signatures is June 11. Learn how from the Catholic Climate Covenant.

Second, ask your Members of Congress to support funding in the 2019 federal budget for programs that address climate change and build resilient communities and ecosystems to withstand extreme weather associated with climate change. Click here to send a letter to Congress.