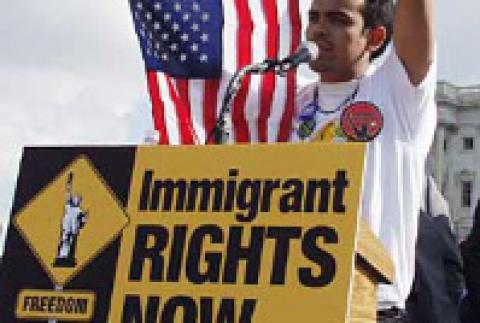 The U.S. Conference of Catholic Bishops is providing a toll-free number to use on Wednesday, November 13, to call the U.S. Congress and urge just and humane immigration reform.

When the call is placed, callers will hear a short recording with instructions to give this message to Members of Congress: “Support a path to citizenship and oppose the SAFE Act.”

[The Strengthen and Fortify Enforcement (SAFE) Act, HR 2278, passed the House Judiciary Committee on June 18. Among other things, it would permit state and local law enforcement officers, untrained in federal immigration law, to issue an immigration hold and detain an individual indefinitely, resulting in prolonged detention for U.S. citizens and lawfully permanent residents. The proposed detention policy calls for an increased number of detention facilities, an increase in the population to be detained (including all individuals awaiting a decision for removal) and an increase in funding for state and local governments to detain individuals in local jails, at a total cost of nearly $1 billion per year. Provisions in the SAFE Act would criminalize religious leaders and houses of worship that provide humanitarian assistance to all persons regardless of immigration status. Section 314 of the SAFE Act would make it a crime to transport undocumented immigrants and "encourage or induce a person to reside in the United States" if that person lacks immigration status. The penalties for engaging in any of these activities are steep, ranging from three to 20 years in prison.]

After the recording, callers will be prompted to enter their zip code on their telephone keypad and will be connected directly to their representative’s D.C. office.

Share with your networks the information about the call-in day, toll-free number and message to Congress and ask them to make the call.

See more at Justice for Immigrants.

ALSO: Webinars from CLINIC (Catholic Legal Immigration Network) -- These webinars are for immigrant and social justice advocates, legal service providers, faith leaders, community organizers, and others working with and on behalf of immigrants and will address the following important issues:

State and local immigration laws: Recap of 2013 and outlook for 2014, Nov. 22: This webinar will review some of the anti-immigrant and pro-immigrant laws passed by states in 2013 on topics including state-issued identification and driver’s licenses, refugee resettlement, immigration enforcement, and access to higher education. Panelists will also address the state-level immigration policy outlook for 2014.