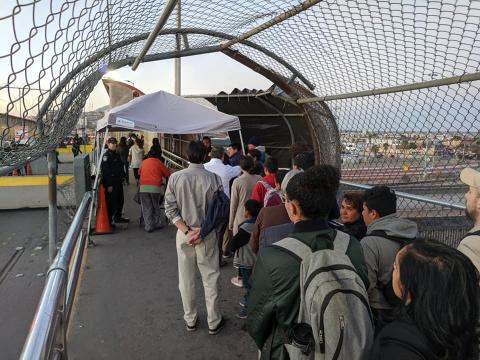 This weekend, we joined Hope Border Institute and the Latinx Catholic Leadership Coalition in El Paso, Texas for a third and final Catholic Day of Action for Immigrant Children. We expressed our deep concern about the current border policies, lack of access to asylum, and increasing racism in the borderlands through prayer, reflection, and action.

After listening to the experiences of Latinx Catholics, we came away with a renewed commitment to end detention, family separation, and trauma due to our nation’s immigration and border policies. Today, join us in calling on the Department of Homeland Security leadership to implement humane and just border policy and listen to the voices of Latinx leaders speaking for our immigrant brothers and sisters.

Hello, my name is (name) from (City, State). As a person of faith, I ask DHS leadership to implement humane changes to immigration and border policies. We call on the Administration and the Department of Homeland Security to honor the dignity and rights of all migrants by recognizing the legal right to seek asylum, ending the “metering” and the Remain in Mexico policies, providing additional funding for immigration courts and asylum officers, and granting the Latinx Catholic Leadership Coalition a face-to-face meeting with DHS leadership.
Thank you.

Thank you for taking action today.

Photo of the U.S-Mexico border bridge to El Paso taken by Dan Moriarty.