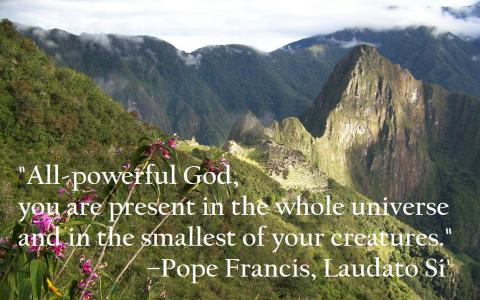 From September 1 to October 4 – the Feast of St. Francis of Assisi –  let us pray for guidance, examine our lifestyles and the way they impact the environment, and act boldly to care for Creation.

Listen to Pope Francis invite us to pray in this 2-minute video "because we need a change that unites us all."

The recent change in the U.S. government’s approach to the climate crisis has left many people asking: “What should we do now?”

Pope Francis offers A Prayer for the Earth in Laudato Si’. Click here to download a PDF version.

The Global Catholic Climate Movement offers a Season of Creation website where you can download a toolkit for your church to host a prayer service, search a map to find a prayer service near you, and learn about ways to take action between September 1 to October 4.

The campaign “Change for the Planet - Care for the People” offers lifestyle changes for you to consider, from buying local food to cutting back on the energy you use. Try one or two each week. Follow it online or download a PDF version.

Speak out about the U.S. government's proposed pollution rules. The Trump administration has announced its intention to roll back pollution controls on coal burning power plants in the United States by replacing the Environmental Protection Agency's Clean Power Plan with the Affordable Clean Energy rule. By the EPA’s own admission, the new proposed rule would lead to as many as 1,400 premature deaths, 48,000 new cases of “exacerbated asthma,” and at least 21,000 new missed days of school every year.

Write a letter to the editor of your newspaper to let your community know that the Affordable Clean Energy rule fails to protect human health and the environment – which is the stated mission of the EPA. Follow the step-by-step instructions offered by the Catholic Climate Covenant.

We hope you will join us in celebrating the Season of Creation. Thank you for all your prayers and actions for the care for Creation!

A Prayer for the Earth