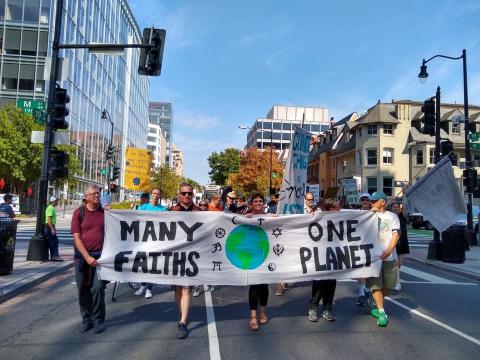 Please join us for a Climate Strike on Friday, December 6.

As teenage climate activist Greta Thunberg said, “Our house is on fire,” and we need to take action. Inspired by Greta and the youth climate strikes, we invite you to join a national climate strike in cities across the United States on December 6.

In Washington, D.C. we plan to join Jane Fonda and her Fire Drill Fridays on December 6. Join the interfaith contingent at the rally at Franklin Square (at the corner of I St. and 14th St. NW) at 11 a.m. and for a march at 12 p.m. Look for us with the banner “Many Faiths, One Earth.” Click here for more details.

For other cities, click here to find a climate strike near you on December 6.

Focus on the Banks

The focus of the December 6 climate strike will be the banks and financial institutions that fund the coal and oil and gas industry, effectively delaying the necessary shift away from an economy based on fossil fuels to one based on efficient renewables.

In the United States, many of the same financial institutions that fund and profit from the fossil fuel industry also fund the for-profit immigration detention system. We call for an end to the painful suffering and human indignity that the detention system inflicts on many immigrants and their families – some forced to migrate because of climate change.

RSVP to join the climate strike on December 6 in Washington, D.C. or in a city near you.

Pray for care of creation individually or with a group using these prayer resources.

Sign a petition and send a letter to BlackRock, Inc., a leading U.S. global investment management corporation, asking them to stop funding and profiting from both the fossil fuel industry and U.S. private prisons.