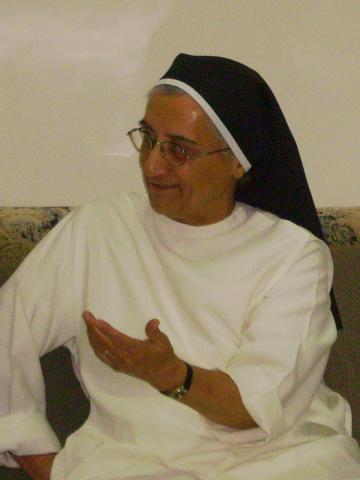 On July 30, Pax Christi International (PXI) issued a statement which began: “[PXI] is extremely concerned over the forced exodus of the Christian community from the Iraqi city of Mosul following threats from the jihadist group Islamic State of Iraq and the Levant (ISIS). According to local reports, Christians are requested to convert to Islam and pay the poll tax for non-Muslims; otherwise, they have to leave the city or risk execution. Christian houses have been marked and churches have been shuttered. Those who flee are finding refuge in surrounding monasteries and villages but others have gone to localities in the Kurdish region of Iraq.” (Read the entire statement here.)

Maryknoll Sisters are members of the Dominican order; Dominican priests, brothers and sisters have had a long history in Iraq, and it is in solidarity with their fellow Dominicans in Iraq that we share the following letter and action suggestions from U.S. Dominicans.

To clarify: This office is not supporting a call for military intervention. Nonviolent solutions exist, and must be promoted whenever possible.

A letter to U.S. Dominicans:

The people of Iraq have endured 35 years of war, sanctions, and occupation which has led to the fracturing of society and the devastation of communities. There is no Iraqi whose life has not been shattered, no family that has not endured the pain and suffering and death that is daily life in a country teetering on collapse. Today, Iraqis face a mortal threat from the failures of their government and the brutal subjugation of northern and western Iraq by the Islamic State.

“We are witnessing, at the hands of [the Islamic State], the eradication of a cradle of Christianity in the cradle of civilization."

We know that our nation bears a special responsibility toward the people of Iraq. As the U.S. bishops have said, “the U.S.-led invasion and occupation unleashed both sectarian conflicts and extremism in Iraq, two tragic unintended consequences that have profound and continuing repercussions for the people of Iraq.”

The past is prologue

“How can we, in the name of peace, consider launching a war that will probably bring devastation to the region for years?” These words of [former Master of the Dominican Order] Timothy Radcliffe, OP written in 1998 during sanctions and ongoing bombings are prophetic of the destruction that has been and is now being rained upon the Iraqi people. Timothy continued, “When we drove back across the desert to Amman I thought of the words of Isaiah to the exiles in Babylon: ‘In the wilderness prepare a way of the Lord, make straight in the desert a highway for our God.’ We followed much the same route that those exiles took when they went home, and it was certainly straight and flat. But I did not feel as if I was going home. I felt sad and almost guilty to leave these people, Christian and Muslim, to their fate. Let us stop this madness.”

Timothy’s letter was the inspiration for the first Voices for Veritas U.S. Dominican delegation to Iraq in 1999. In the intervening years, we U.S. Dominicans have developed a special friendship with the Dominicans of Iraq.

Now our sisters and brothers are calling out to us again:

We ask you, please, to pray for us. Be sure that your prayers strengthen our faith and give us courage to endure these days of turmoil….Please keep up the prayers because we cannot lose hope….We ask you to pray for us. It is hard to pray when you live in such a volatile situation, but we believe in your prayers…Forget us not.

His Beatitude Louis Raphael I Sako, Patriarch of Babylon of the Chaldeans, recently wrote to Cardinal Philippe Barbarin, Archbishop of Lyon: “[As] my thoughts today turn to the situation in Iraq, Syria and Gaza-Palestine, my heart bleeds for the innocent who are dying or are being driven from their homes, and I am sad for the timidity of the civilized world towards us...Eastern Christianity must not disappear. Its disappearance is a mortal sin and a great loss to the Church and humanity. It must survive or better, it must live in freedom and dignity. In this storm, may you and those who are with you accept the expression of my gratitude. Forget us not!”

What you can do

As Dominicans and as U.S. citizens, we bear a responsibility to respond, to not let the suffering of the Iraqi people go unnoticed and forgotten.

This week as we celebrate the life and message of our holy father Dominic, we are called to respond to the plea of our brothers and sisters in Iraq through prayer and action.

There is little in mainstream news about what is happening in Iraq. The following resources will help you to keep yourself educated and aware.

The PBS series Frontline’s documentary Losing Iraq is also an informative overview of how we got here.

Thank you, sisters and brothers, for your commitment to raise your voices as our sister St. Catherine of Siena calls us to do: “Cry out as if we have a million voices for it is silence which kills the world."

and the Iraq Working Group:

Photo of Dominican sister in Mosul by Marie Dennis, taken in 2010 during a Pax Christi International visit to Iraq.