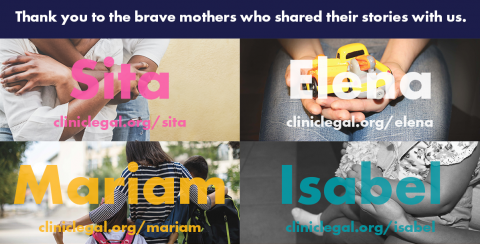 In honor of Mother’s Day 2019, CLINIC has collected the stories of four mothers who have gone through or are currently going through the asylum process. It is our hope that these stories illustrate the experience of motherhood under extreme circumstances, and how they are connected by perseverance, love, and hope.

Sita is a mother of three. She fled political persecution in Ivory Coast and recently became a U.S. citizen after nearly a decade of struggle. The asylum process took longer than she expected—a wait of more than 4 years. Despite hardship, Sita has never wavered in her commitment to bring stability and peace back into her life and that of her children. Read Sita's story.

Elena is originally from Honduras and is a mother of two girls and one boy. She arrived to the United States approximately 3 years ago with her then 14-month-old daughter. Elena made the difficult decision to leave Honduras after surviving several years of physical and psychological abuse from her husband. To live fully – without beatings, threats and humiliations – is a universal right. Elena has sought a new chapter in the United States, free of violence. Read Elena's story.

Mariam, a mother of two children, was born and raised in the Middle East. All three are survivors of domestic violence. They left their home country out of safety concerns, as the government had no adequate system to provide protection. Mariam and her children were granted asylum several years ago and recently became lawful permanent residents. CLINIC has decided to spotlight her story for Mother’s Day 2019, in an effort to celebrate mothers who stand by their families and seek a life free from discrimination and gender based violence. Read Mariam's story.

Isabel is a young mother who fled from Central America due to death threats by organized crime. She entered the United States approximately a year ago seeking protection of asylum. Isabel’s story is emblematic of the social political difficulties, which affects youth’s access to opportunities.  Isabel has hope for a stable and healthy future for her family. CLINIC recognizes the difficulties, which many young immigrants face around the world, and stands in solidarity with those who flee from violence. Read Isabel's story.

Want to demonstrate your support of asylee mothers? Sign our petition calling on the administration to end their relentless attacks on asylum seekers.