In Honor of Berta and In Defense of All Defenders 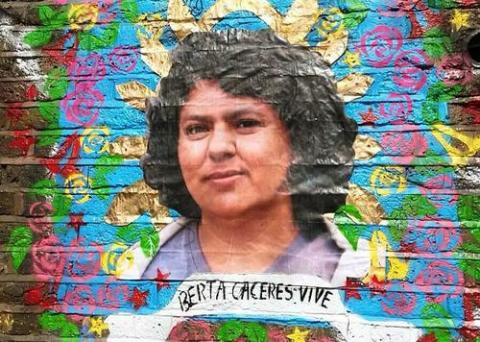 From the Latin America Working Group:

This Sunday, March 3, marks the third anniversary of the death of beloved environmental and indigenous rights defender Berta Cáceres. The renowned Honduran activist, who founded the Civic Council of Popular and Indigenous Organizations of Honduras (COPINH), dedicated her life to protecting the environment and uplifting indigenous communities. Her assassination sent shockwaves across the world. Although international outrage helped move this emblematic case forward, the intellectual actors of her murder are still at large.

The case of Berta Cáceres put a spotlight on the Honduran state's systemic persecution of rights defenders and deeply rooted corruption. However, three years later, nothing has changed. In fact, things have only gotten worse.

Last Friday, 12 recognized Honduran human and environmental rights defenders were unjustly imprisoned for defending their communities' right to clean water. They now face being kept in prison for up to 2.5 years while they wait for a full trial on unfair and politically motivated charges.

These arrests took place in a context of ongoing tension. On September 7, the defenders were first wrongfully accused of theft and damage. Later, on October 27, approximately 1,500 police and military forces violently evicted the Resistance Camp of Guapinol, where community members were protesting against the development of the Inversiones Pinares mining project near the Guapinol River. Since then, 31 people so far have been brought to trial.

The cases of Berta and the Guapinol defenders are far from isolated incidents. Honduras continues to be one of the most dangerous countries for environmental defenders in the world. And the repression of civil society, in general, has worsened in the last couple of years.

Susan, we must SPEAK OUT against the Honduran government's attacks on human rights and environmental defenders. Let us honor the memory of Berta by standing up for what's right!