Guatemala: Stand for peace and against metal mining 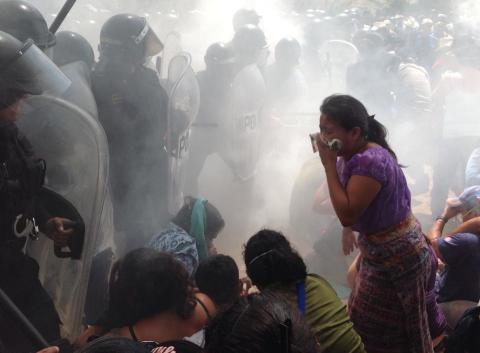 For more than two years, the residents of La Puya, San José del Golfo in Guatemala maintained a peaceful road block against a proposed gold mine that would contaminate the water and land, and displace the community. They repeatedly called on the government and the principle investors to dialogue with them.

See Guatemala: Search for mining justice in the March-April 2014 NewsNotes for more information.

On May 23 hundreds of police arrived and used tear gas and flash bombs to evict the roadblock and escort mining equipment from Radius Gold and U.S. engineering firm Kappes, Cassidy and Associates to the mining site, El Tambor. More than 20 residents were injured. Take action today to defend human rights in La Puya.

At all levels of the Church and across faith traditions, the negative impacts of extractive industries are raising concerns. The Pontifical Council for Justice and Peace said, “Mining, like many other industrial activities, has ecological and social consequences which go well beyond national borders and pass from one generation to the next.” As the blockade was being removed in La Puya, Archbishop Oscar Julio Vian Morales pleaded for dialogue before the mining project went forward. ("Arzobispo Óscar Vian aboga por diálogo en La Puya," article in Spanish.)

You too can lift up your faithful voice in defense of water and life in La Puya.