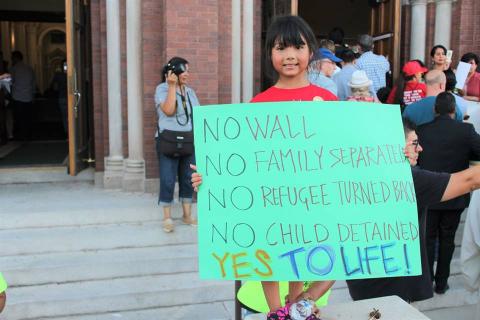 The Trump administration has missed another court-ordered deadline to reunite migrant families separated at the U.S.-Mexico border due to the "zero tolerance" policy. It appears that the government reunited upwards of 1,500 children with their parents but hundreds more children are still separated.

Gerry Lee, director of the Maryknoll Office for Global Concerns, visited El Paso last week and volunteered at a migrant shelter run by Annunciation House, one of the four organizations in the United States that is receiving reunited families.

“It was inspiring to see the generous response of churches in El Paso and volunteers from around the country who are pitching in to accommodate the hundreds of parents and children being reunited at the shelter," Lee said. "While it was heartwarming to witness children as young as 3 being reunited with their mom or dad, at the same time the kids were clearly traumatized, and uncertain if they wouldn't be separated again. Some were angry at their parent, feeling that they had been abandoned, not understanding that it wasn’t their mom or dad’s fault.”

"Annunciation House is experiencing a critical shortage of full-time, long-term volunteers, at a time when we are receiving more refugees than ever," said Mary, volunteer coordinator at the house of hospitality in El Paso. Requirements are the ability to speak Spanish and commit to volunteer for at least three months, ideally one year. To learn more, visit https://annunciationhouse.org/volunteer/ or email volunteercoordinator@annunciationhouse.org

The leadership of the three Maryknoll entities – the Maryknoll Sisters, the Maryknoll Lay Missioners, and the Maryknoll Fathers and Brothers – issued a joint statement denouncing the administration’s “zero tolerance” policy of criminally prosecuting parents, forcibly separating them from their children at the U.S.-Mexico border, and severely restricting asylum claims. “This policy takes the United States down a path clouded by fear, violent rhetoric, and distorted ideologies that violate our core values as Americans and as Christians,” the statement read. Read the full statement here.

Take action: Contact your members of Congress during the August recess

Congress will be home in August and needs to hear from faithful communities about this critical issue as they discuss more funding for detention and other immigration enforcement. Congress must act to fund the government for fiscal year 2019 by September 30, 2018.

Here are 5 ways to take action during the August recess:

2. Write Congress. Click here to send a message to your members of Congress.

3. Visit your member of Congress’ office. Schedule a visit using our directions, or drop off a print version of the Maryknoll leadership statement and your message.)

4. Attend a Town Hall. Ask your member of Congress what they are doing to stop forcible family separation and family detention. Encourage them to reject additional spending for detention and deportation, and increase oversight over existing enforcement. Look up if your member of Congress is having a town hall attownhallproject.com or by calling their D.C. office.

5. Engage with candidates running for office in your community. Candidates need to hear that this is an issue that voters care about. Ask candidates if they support reducing funding for immigrant detention and investing in community-based alternatives to detention. Ask what they will do to advance policies that protect family unity and the dignity of all immigrants, refugees, and migrants.

Our message to Congress is the four action points named in the Maryknoll leadership statement:

We believe that in the process of enforcing immigration laws, the U.S. government is obligated to protect the human rights and dignity of all migrants, with particular consideration for those most vulnerable – refugees, asylum seekers, and children. Ultimately, for our broken immigration system to be fixed, part of the solution must be to help Central American countries to resolve these root causes of migration, giving families the possibility of staying in their homeland and finding the means to live with dignity.