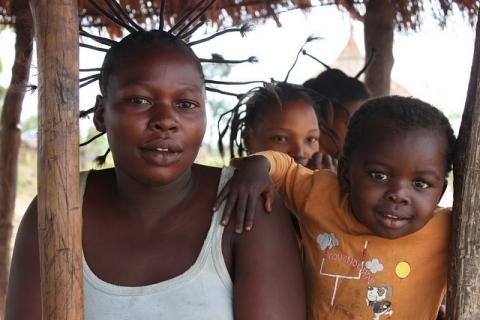 The following alert is from the Africa Faith & Justice Network.

Photo of displaced persons in Ngilima, DRC from Oxfam International

Every day in eastern Democratic Republic of the Congo (DRC) there are news reports of kidnapping for ransom, targeted assassinations, rape and looting by armed groups.

[See list of DRC-related articles at AllAfrica.com; the DRC is referred to as "Congo-Kinshasa."]

On May 15, H.Res 131, a resolution "Concerning the ongoing conflict in the Democratic Republic of the Congo (DRC) and the need for international efforts toward long-term peace, stability, and observance of human rights" passed the House Africa Subcommittee with bipartisan support; it will now head to the full House Foreign Affairs Committee for consideration.

Call today with this message: “My name is [  ] and I'm from (city, state). I am calling to urge Representative [  ] to cosponsor H.Res 131, a resolution regarding the Democratic Republic of the Congo. I will be following Rep. [  ]'s action on this. Thank you."

Has your representative already cosponsored this bill? Call them to thank them and encourage further support of DRC action. (They count these calls, too!)

The conflict in the Democratic Republic of the Congo (DRC) remains the deadliest since World War II and has resulted in the loss of over four million lives since 1998 and the displacement of millions more. As many as 1,000 people a day continue to die from war-related causes -- mainly disease and malnutrition, but also continuing violence, primarily in the eastern region.

The war began when Uganda and Rwanda invaded to overthrow DRC's President Mobutu Sese Seko in 1997, a bid that was successful. But they invaded again in 1998 to overthrow Mobutu's successor, Laurent Kabila. In response, three other countries -- Zimbabwe, Angola, and Namibia -- intervened to defend Kabila and fought against Rwanda and Uganda. The withdrawal of these countries from the Congolese territory in late 2002 left behind a DRC in shambles.

Though peace agreements have been forged and the country has moved to an elected democratic government, peace has yet to come to DRC. Violence continues to wreak the mineral-rich region of eastern Congo, where Uganda and Rwanda are still suspected of  supporting local militias. Minerals mined in the region end up on engagement rings and in computers in America, and proceeds from their sales drive a local war economy.