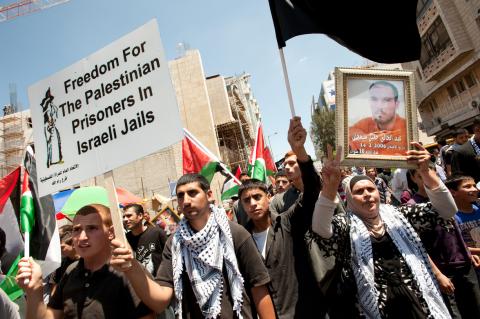 While peacemakers everywhere welcome the ceasefire in Gaza, the underlying issues that led to the war remain. The Israeli occupation of Palestinian land, including the Gaza blockade, must end. And the human rights violations inherent in the occupation must not be allowed to continue unchecked. Keep these concerns before legislators this month, by joining in the World Week for Peace in Palestine Israel, held annually in September and sponsored by the Palestine Israel Ecumenical Forum of the World Council of Churches. This year’s theme is prisoners.

Around 4,800 Palestinians were in Israeli custody as of March 2014, according the Palestinian Centre for Human Rights (PCHR). Palestinians detained by Israel face a host of concerns including the practice of administrative detention, and the treatment of minors.

Israel's use of administrative detention blatantly violates the restrictions of international law. Israel carries it out in a highly classified manner that denies detainees the possibility of mounting a proper defense. Moreover, the detention has no upper time limit. Over the years, Israel has placed thousands of Palestinians in administrative detention for prolonged periods of time, without trying them, without informing them of the charges against them, and without allowing them or their counsel to examine the evidence. In this way, the military judicial system ignores the right to freedom and due process, the right of defendants to state their case, and the presumption of innocence, all of which are protections clearly enshrined in both Israeli and international law.

The treatment of Palestinian minors by Israel is also of deep concern. A 2013 UNICEF report found, “The ill-treatment of children who come in contact with the military detention system appears to be widespread, systematic and institutionalized…” A review one year later by Military Court Watch acknowledged some attention had been given to UNICEF’s findings, but concluded that the original negative assessment still held.

Contact your senators and representative today to raise these concerns. Ask them to bring to the attention of Israeli government officials the issue of Palestinian prisoners in Israeli custody. If they will be traveling to the region soon, ask them to address these concerns in person, otherwise, ask them to contact the Israeli ambassador to the United States.

Furthermore, ask them to speak and act for a just peace by:

For a just and secure future for Palestinians and Israelis, use this link to contact your elected officials today.