Ask your Senators to Support Human Rights in Honduras 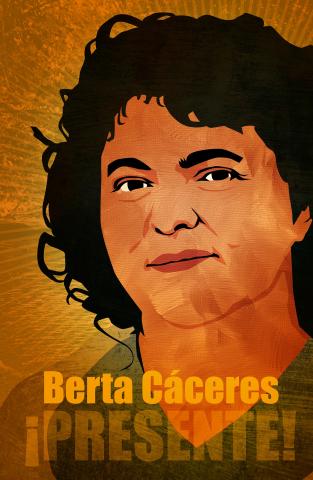 In honor of International Women's Day (March 8) and the recent fifth anniversary of the murder of Berta Cáceres, a courageous Honduran environmental and indigenous leader, we invite you to take action to end corruption and impunity in Honduras.

Take action: Call your Senators to urge them to support the Honduras Human Rights and Anti-Corruption Act of 2021.

It is essential that Senators hear their constituents asking for Congress to carry on Berta’s mission to defend indigenous territory and natural resources from harmful development projects. Berta Cáceres worked tirelessly for the indigenous peoples of Honduras. Her courageous activism led to her murder and the planners of the attack have never been held accountable.

Call the Capitol Switchboard at 202-224-3121 to ask to be connected to your Senator’s office. Look up the names of your two Senators here and call twice.

Use this sample script offered by the Latin American Working Group (LAWG):

“Hello, I’m calling to leave a message for the senator. My name is [First and Last Name] and I am a constituent from [City, State, Zip Code]. I am calling to urge the Senator to cosponsor the Honduras Human Rights and Anti-Corruption Act of 2021. Corruption by Honduran government officials robs public resources and fuels poverty. Human rights activists and citizens who stand up to these injustices have been threatened, killed, and jailed. The proposed bill suspends security assistance and puts pressure on the Honduran government to promote the wellbeing of the Honduran people. It does not cut off humanitarian aid that truly addresses the root causes of forced migration—in fact, the bill’s strong stance against abuse and corruption will help address one of the root causes of migration from Honduras to the United States. Thank you for considering cosponsoring this bill.”

Learn more about the situation in Honduras on the LAWG website.