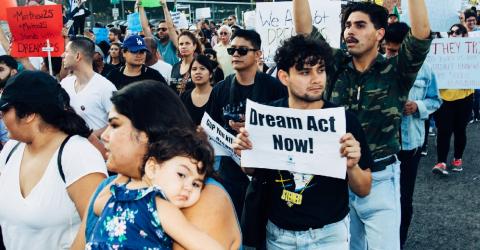 Now that President Trump has rescinded the Deferred Action for Childhood Arrivals (DACA) program, Congress has very limited time to protect those left vulnerable to deportation and pass the DREAM Act.

Take action: Ask your Representative to support a petition to force a vote on the Dream Act.

A “discharge petition" was launched in the House of Representatives to force a vote on the DREAM Act of 2017. This bill would provide a permanent legislative solution and pathway to citizenship for between 1.2 million and 1.8 million “Dreamers” — those undocumented people brought to the United States as children — which includes the nearly 800,000 DACA recipients.

Such a petition requires a majority of members to sign on to force a floor vote. Please ask your Representative to sign the petition and vote for the DREAM Act!

For more information on the DACA program and Dreamers, see the Justice for Immigrants Campaign’s resource page.