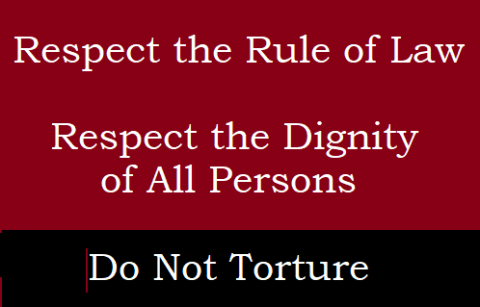 On Wednesday, May 9, Gina Haspel’s confirmation hearings for director of the CIA will begin. The Maryknoll Office for Global Concerns and seven national Catholic organizations sent a letter to Congress opposing Haspel's nomination to be CIA Director because of her record on torture.

"Using basic moral standards for human dignity disqualifies [Haspel] from leading the agency," the letter from the eight Catholic organizations said. Confirming Haspel "would also be understood as a message of support for torture by our President – who has repeatedly stated his personal interest in restarting the torture program." The letter also noted that if Haspel is confirmed, "American Catholic pastoral and humanitarian aid workers would be distrusted and endangered."

Read the full text of the letter here

Maryknoll missioners often accompany impoverished and marginalized communities in countries where the rule of law does not exist. At times, people in these communities are imprisoned without trial, are tortured and even “disappeared.” Missioners themselves have suffered imprisonment, interrogation, torture, and at times, death. Confirming Gina Haspel would be a direct endorsement of torture. Some call torture “enhanced interrogation techniques.” We stand with Pope Francis in calling torture a mortal sin “contrary to human dignity.”

In 2015, a law authored by Senator John McCain, himself a torture survivor, and Senator Dianne Feinstein was passed by Congress, permanently banning the “enhanced interrogation techniques,” including waterboarding and sexual humiliation, that were part of the CIA’s torture program. President Donald Trump says he believes “torture works.” From experience, Maryknoll missioners cry out: respect the rule of law, respect the dignity of all persons, and do not torture! Oppose torture and oppose the nomination of Gina Haspel.