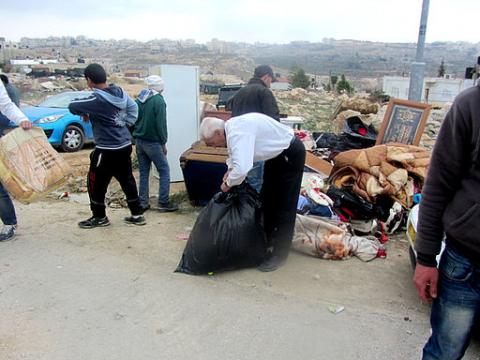 The Israeli practice of demolishing Palestinian property to make way for Israeli settlements is threatening more and more villages and neighborhoods throughout the West Bank including East Jerusalem.

Demolishing homes and property causes untold suffering for Palestinian families and communities and does nothing to further the prospects for a just peace.

Click here to contact your senators and representative today and ask them to urge the State Department to firmly appeal to the Israeli government to stop the demolition of Palestinian homes and property.

“The number of demolitions for just the first six weeks of 2016 is greatly alarming,” the U.N. humanitarian coordinator for the occupied Palestinian territory, Robert Piper said. “[More than] 400 Palestinians have been displaced from their homes – equivalent to over half the total number of Palestinians displaced in all of 2015.”

Palestinian homes are often demolished due to the lack of a building permit even though only a tiny fraction of Palestinians living in Area C — the area of the West Bank under Israeli civil and security control—receive the necessary Israeli-issued permits.

The Israeli government also demolishes homes of Palestinians suspected of or implicated in attacks on Israelis.  A recent UN report states, “Punitive demolitions are a form of collective punishment and run counter to a range of provisions under international law.”

Raise your voice today for a just and lasting resolution to the Palestinian and Israeli conflict.

Photo: The Idris family collecting their belongings after the demolition, January 27, 2014. Photo by 'Amer 'Aruri, B'Tselem's field researcher in East Jerusalem and licensed in the creative commons 4.0.