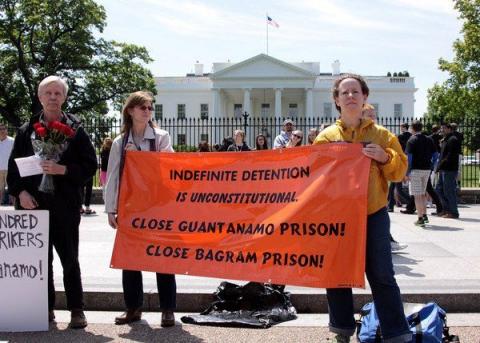 While President Obama has transferred more than 175 men from the prison, 55 men remain.

Join us in promoting this message from the National Religious Campaign Against Torture:

It is imperative to make clear to the incoming Trump Administration that torture, discrimination, and indefinite detention are wrong. There is no exception.  Any attempt to bring back torture or to send new people to Guantánamo will be strongly opposed in the United States and throughout the world.  Any effort to persecute Muslims – or any other religious, racial, or ethnic group - through special immigration or surveillance measures is unacceptable.

Please join us in prayer and action to share this important message.

Rally: If you are in the Washington, D.C. area, join us tomorrow, Wednesday, January 11 at 11:30am at the Supreme Court.  The rally will be followed by a procession to the Senate office buildings. Click here for information on the rally.

Pray: For the men who remain imprisoned at Guantanamo, the personnel of the detention center, and the leaders of our nation. Click here for sample prayers and litanies.

Photo: Scott Wright (left) of the Columban Center for Advocacy and Outreach holds flowers, Susan Gunn (center) and Judy Coode (right) of MOGC hold a sign at a prayer vigil to end torture at the White House in 2014.