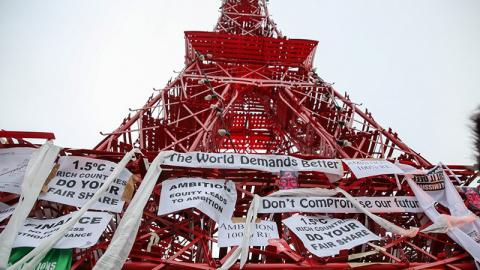 The president is continuing to hear from advisers on the pros and cons of the United States remaining in the global climate accord. The meeting between President Trump and Pope Francis could have a significant influence on President Trump’s decision.

Please send a message to President Trump to urge him to stay in the Paris climate agreement.

We already see the life-altering effects of climate change—melting polar ice caps are displacing critical polar bear habitat, extreme drought conditions from East Africa to California, loss of shorelines and islands from rising sea levels, and powerful superstorms. We know that the effects of climate change hurt the Earth and impoverished communities first and worst.

Pope Francis has called us to an “ecological conversion” to orient our hearts, practices, and politics to ensure that the Earth thrives for future generations of all species.

Pope Francis has also calls politicians to have the political courage to address climate change through an honest dialogue. Remind President Trump of this message ahead of his visit to the Vatican.

Photo: Signs in support of a global climate accord on the Eiffel Tower during the Paris Climate Talks, November 30 to December 12, 2015.