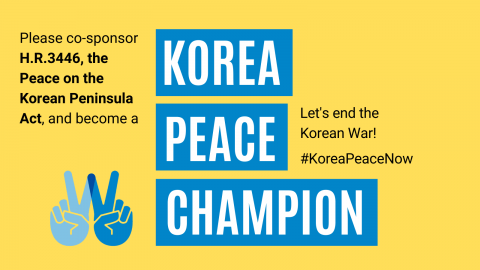 Join us in calling for peace on the Korean Peninsula.

The Korean War was never officially ended, and tensions on the peninsula and between North Korea and the United States continue to put millions of lives at risk. It has been 68 years since the fighting stopped, and yet divided families are still separated, and sanctions block badly needed aid from reaching North Koreans.

This week is Korea Peace Advocacy Week, a campaign led by Korea Peace Now! Women Mobilizing to End the War. The Maryknoll Office for Global Concerns and peace activists from across the United States have been meeting with Congressional offices, urging their support for a number of bills that move us closer to peace.

Now we ask you to send your own message to Congress.

We stand with Pope Francis, who in his 2014 visit to Korea, prayed “for the emergence of new opportunities for dialogue, encounter and the resolution of differences, for continued generosity in providing humanitarian assistance to those in need, and for an ever greater recognition that all Koreans are brothers and sisters, members of one family, one people.”