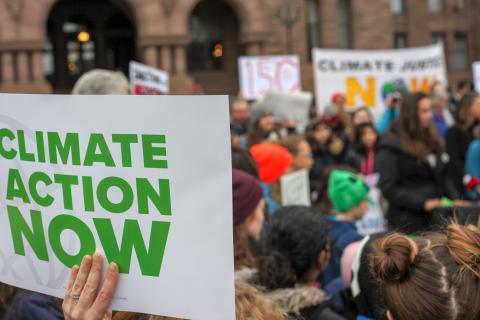 World leaders are meeting at the United Nations Climate Talks in Scotland to make new commitments to address climate change. These important meetings come just weeks after scientists released an alarming report on the state of the climate that UN Secretary-General António Guterres called a “code red for humanity.”

For an update on what’s happening at the UN Climate Talks: Tune in to a webinar featuring Chloe Noel of the Maryknoll Office for Global Concerns, Wednesday, Nov. 10, at 1pm Eastern. Register to watch live and to receive the link to the recording to watch later. Register now!

The fact is the poorest countries, those who have contributed the least to global warming, are those who will suffer the most.

Funding is needed to assist countries in the Global South to adapt to changing weather conditions and reduce their emissions. The Biden Administration pledged to increase climate finance to $11.4 billion by 2024. But the work doesn’t stop with the president’s pledge.

Congress needs to pass a budget that includes the funding to assist poorer countries. But less than one percent of the U.S. budget goes to foreign assistance. Meanwhile, Congress is planning to increase the Pentagon budget by more than $35 Billion even after exiting the costly conflict in Afghanistan.

It is time to align the budget to match our values of peace, justice, and integrity of creation. Ask your Senator to support an amendment from Senator Markey (D-MA) to the National Defense Authorization Act that would direct 1% of the Pentagon budget to international climate finance.