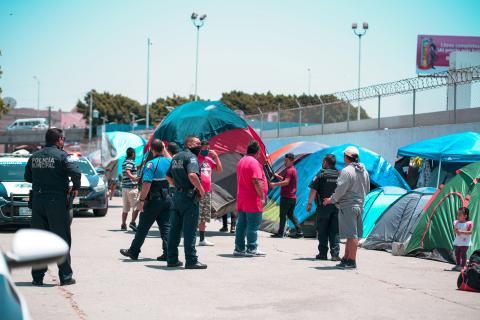 Since coming into office, President Biden has maintained use of the Trump-era Title 42 public health law to rapidly expel migrants and asylum seekers at the border, denying many their legal right to seek asylum. Now, the Biden administration is debating whether to follow through with their plan to end Title 42 expulsions on May 23.

Since March 2020, the Department of Homeland Security (DHS) has used Title 42 to block and expel migrants arriving at the southern border, including asylum seekers and children. The Title 42 health order was issued by the Centers for Disease Control (CDC) in 2020 under pressure from the Trump administration, despite objections by CDC health officials that there was no legitimate public health reason to justify such rapid expulsions.

Many migrants expelled under Title 42 have been sent back to their countries of origin, putting them at risk of persecution, torture and other serious danger in violation of U.S. refugee and anti-trafficking laws and treaty obligations.

Now, it is even clearer that there is no justification for use of Title 42 to expel migrants, given that pandemic-related restrictions are easing across the country. It is high time to end the use of Title 42, restore the asylum system, and create robust systems to aid migrants arriving at the southern border.

Heidi Cerneka, a Maryknoll lay missioner working as an immigration attorney at the border, says of the Title 42 policy, “I understand that it is complicated [to wind down], but this is a moral and legal issue, and it can’t wait.” She said she was “sad that things like Title 42 have not changed with the departure of Trump. Well-intentioned activist people keep telling us to be patient....But we can’t be patient because so many people have been denied justice, and their lives have been put at risk by our policies for far too long. So my job is not to be patient but to be impatient.”

Take action today: Urge President Biden to end Title 42 expulsions. Ask him to follow through on his promise to restore the asylum system.