Pray, Study, Act for the Season of Creation 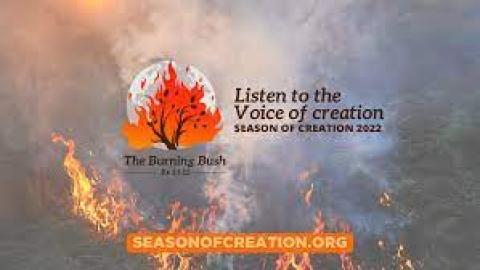 This year’s symbol for the Season of Creation is the burning bush, a poignant image that evokes recent devastating consequences of climate change: burning forests, heat waves, record droughts, fleeing animals and migrants throughout the globe.

Here are ways you can celebrate the Season of Creation.

Pray: Download the Season of Creation Guide from an ecumenical group of partners committed to pray, collaborate and mobilize to care for our common home.

Study: Learn about the historic climate bill —  the Inflation Reduction Act —  that commits $369 billion to decarbonize and strengthen our economy while protecting communities directly affected by climate change.

Act: Send a message to your U.S. Senator, using the Catholic Climate Covenant’s website. Let them know how you feel about the historic climate bill and their vote.