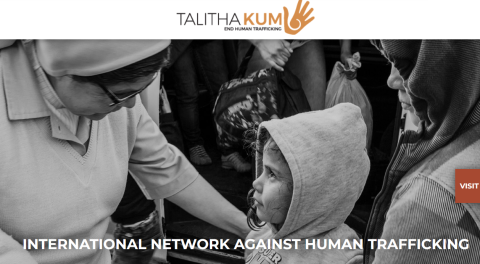 January is a key time to educate ourselves about human trafficking and to learn to spot the signs of trafficking. Scroll down to learn what you can do.

What is human trafficking

You may have heard it referred to as “trafficking in persons” and “modern-day slavery.” No matter the name, human trafficking is a crime and human rights abuse.

In the United States and around the world, traffickers compel victims to engage in commercial sex and to work in both legal and illicit industries and sectors, including in hospitality, agriculture, janitorial services, construction, landscaping, restaurants, factories, care for persons with disabilities, salon services, massage parlors, retail services, fairs and carnivals, peddling and begging, drug smuggling and distribution, child care, and domestic work.

Maryknoll Sr. Abby Avelino is the international coordinator for Talitha Kum, an umbrella network of Catholic Sisters-led networks around the world advocating against human trafficking.

Sr. Abby coordinated the efforts of Talitha Kum for all of Asia — the area of the world with the highest incidents of modern-day slavery. Of the estimated 40 million people trafficked worldwide, according to the International Monetary Fund, two-thirds of them (25 million people) are in East Asia and the Pacific. As a result of her work, she was elevated to international coordinator.

“We have trained 26 young people — women and men — ages 19 to 30 years old, in 10 countries in Asia to be anti-trafficking youth ambassadors among children, youth and young adults at the grassroots level,” Sr. Abby says. “They implement awareness-raising activities, both in-person and online, visiting churches, schools, orphanages and remote villages.” Their use of social media platforms gives visibility to Talitha Kum and its mission.

Learn to Spot the Signs

The International Day of Prayer and Awareness Against Human Trafficking and the feast of St. Josephine Bahkita, the patroness of human trafficking survivors, are celebrated in the Catholic Church on February 8. We want to share resources for prayer and awareness trainings for high schoolers and adults. For the latest info, visit the U.S. Catholic Sisters Against Human Trafficking

January 11 is the day to wear blue to raise awareness of human trafficking. Share a photo of yourself wearing blue on social media along with the #WearBlueDay, to get your family and friends talking about learning to spot the signs of human trafficking in your community