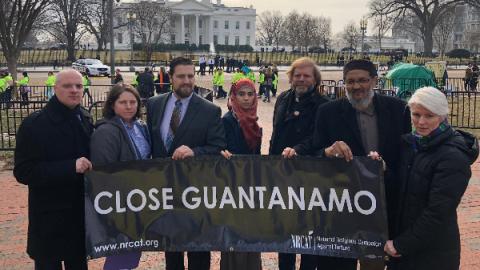 From our partners at the National Religious Campaign Against Torture

With the transfer of Assadullah Haroon Gul from the prison at Guantanamo this June, thirty-six men still remain imprisoned there. Nineteen of these men have already been approved for transfer from Guantanamo.

The U.S. House of Representatives will soon be voting on amendments to the National Defense Authorization Act (NDAA).

While President Biden and the military commissions continue to make progress with plea bargains and other legal strategies to transfer the remaining detainees out of Guantanamo, there is a growing and urgent need to provide health care to these aging men that cannot be provided in the prison. Most are survivors of brutal torture.

We are working with human rights partners to ensure that the House and Senate versions of the NDAA remove all restrictions on transferring Guantanamo detainees to the United States for any reason, including for trial or for necessary medical treatment.

Here’s a sample script you can use: