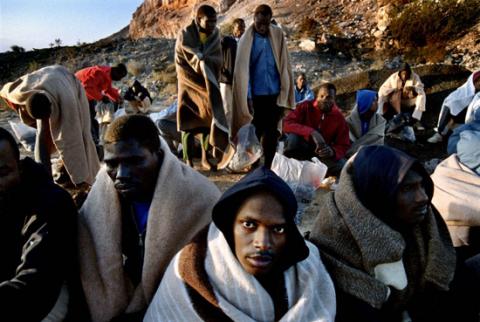 People on the move

In Africa, Asia, the Pacific and throughout the Americas, including in the United States, Maryknoll missioners live and work with people on the move. Voluntary migrants themselves, missioners depend upon the hospitality of strangers. In crossing borders, they experience global solidarity and celebrate cross-cultural community.

In Vietnam, they accompany young, unskilled women preparing to migrate to other countries in Asia as temporary workers. In Africa, they experience the serious consequences of the “brain drain,” as doctors, nurses and other professionals move to Europe, Australia and the United States for employment. In Chile, Panama and Japan, they work with in-migrating peoples. In Mesoamerica and Mexico they help support thousands on the long journey north. In Thailand, in the Great Lakes region of Africa, in the United States, they work in refugee camps and detention centers where migrants struggle for justice and dignity.

Whether migrants are fleeing war, repression or violent conflict, or are on the move away from poverty, looking for work, Maryknollers have seen that the consequences for them and for their families, as well as for sending and receiving communities, are huge.

Too often those consequences include death. In the past 10 years, for example, thousands of migrants have died along the Mexico-U.S. border. Draconian immigration policies, instituted in the mid-1990s, sealed major urban crossing areas in the southern U.S. and forced migrants into deadly desert regions. Policy makers assumed that the desert would prove a deterrent to undocumented migration, but tragically, that has not been the case.

The cost of remittances

Remittances, the monies earned by workers in foreign countries and sent home to support their families and local communities, are a particularly complex aspect of the migration cycle. Human beings are the most valuable export for many countries; remittances their most important source of foreign exchange. The dedication of these migrants, who often work at or below minimum wage, is extremely admirable, but the cost in divided families and bereft communities is staggering and the long term impact on local economies is yet to be seen. In any case, it is very disturbing to hear U.S. government officials claim remittances as a positive contribution from the U.S. to financing for development in poor nations.

Asylum seekers and refugees are often treated like undocumented migrants until proven otherwise. For those escaping conflict, repression or persecution, such definitive proof is often impossible to obtain. The system in the U.S. and in many other countries demands that such persons be held in detention until a hearing. Often they are in a regular prison for weeks, months, even years – without access to legal advice or translation services.

Catholic Social Teaching on migration is extensive, always keeping the focus on migrants and refugees as human beings, children of God, deserving of respect and dignity. Too often migrants’ unique faces are lost in generalized ethnic groupings. Their search for food and employment disappears in politicized “immigration” debates, and their physical and emotional suffering is subsumed into “human rights violations.”

In their joint document from 2003, “Strangers No Longer: Together on the Journey of Hope,” the Catholic Bishops of Mexico and the United States identified five areas of Catholic Social Teaching that specifically guide the church’s response on migration issues:

1. Persons have the right to find opportunity in their home land. Work that provides a just living wage is a basic human need. Therefore, each individual has the right to find in their own country the economic, political, and social opportunities to live in dignity and achieve a full life through the use of their God-given gifts.

2. Persons have the right to migrate to support themselves and their families. “The Church recognizes that all the goods of the earth belong to all people.” When a person cannot find work in their country of origin, they have the right to travel to another country to support themselves and their families. Sovereign nations ought to provide avenues to accommodate this right.

3. Sovereign nations have the right to control their borders, but are obliged to accommodate migrant flows. While the Church recognizes the right of sovereign nations to control their territories, the Church rejects such control when it is purely for the purpose of acquiring additional wealth. Powerful economic nations, with the ability to protect and feed their residents, have a greater obligation to welcome migrants.

4. Refugees and asylum seekers should be afforded protection. “Those who flee wars and persecution should be protected by the global community. This requires, at a minimum, that migrants have a right to claim refugee status without incarceration and to have their claims fully considered by a competent authority.”

5. The human dignity and human rights of undocumented migrants should be respected. Migrants are often subjected to punitive laws and harsh treatment from enforcement officers in receiving and transit countries. It is necessary that governments respect the basic human rights of migrants regardless of their documented status.

These principles, rooted in the inherent value of each human person; in the community‘s responsibility to protect the most vulnerable; and in the Gospel mandate to welcome the stranger should be the lens through which we evaluate all proposals for international and national laws and policies, as well as public and private practice. With that in mind, we call for:

• Urgent attention to the root causes of involuntary migration, especially war and economic injustice, with its bitter fruits of poverty, unemployment and family separation;

• A definitive end to human trafficking; the provision of protective and rehabilitation services for trafficked persons;

• Just and compassionate national immigration policies that counter punitive and isolationist tendencies driven by fear of the “other;” that recognize the importance of global solidarity in an intensely polarized world; and respect the inherent dignity and human rights of all migrants, documented and undocumented alike;

• Protection of refugees and asylum seekers and the reversal of laws and policies that lead to their incarceration;

• Critical attention to the human cost of relying on remittances to replace just and sustainable national and local economies;

• The United States and all UN member states to ratify and implement the International Convention on the Protection of the Rights of All Migrant workers and Members of their Families; and

• Creation of a Permanent Forum on Migration Issues within the United Nations as a locus for ongoing dialogue and policy formulation among governments, migrants, nongovernmental organizations, civil society and the private sector.