Love and welcome for refugees 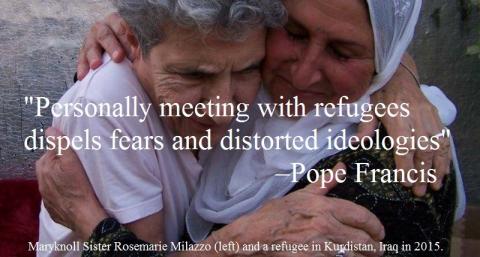 The Maryknoll Office for Global Concerns issued the following press statement on September 13, 2017.

As a Catholic missionary organization advocating for justice and peace around the world, the Maryknoll Office for Global Concerns speaks from the experience of our missioners and the communities with which they work, more often than not communities of migrants and refugees fleeing from violent conflict, natural disasters and hunger. We bear witness to their suffering, their hope, and their will to live. For these reasons and more, the Maryknoll Office of Global Concerns joins with many other faith groups and policy experts in denouncing President Trump’s plans to slash the number of refugees the United States will admit in 2018 to 50,000 – the lowest level since 1980.

“To gut the refugee resettlement program and to set a record-low cap on refugees now, in the midst of a global migration crisis, would be a scandal,” said Gerry Lee, director of the Maryknoll Office for Global Concerns. “Pope Francis proclaimed that ‘refugees are not pawns on the chessboard of humanity. They are children, women, and men who leave or who are forced to leave their homes…the flesh of Christ is in the flesh of the refugees: their flesh is the flesh of Christ.’”

To reject refugees out of fear or distorted ideologies would violate our core values and traditions and would further diminish the United States’ role as a world leader. We call on faith leaders, business leaders, and our representatives in Congress, to demand that our nation open its doors to at least 75,000 refugees in 2018, which is still far fewer than the previous administration’s cap of 110,000 and the average cap of 95,000 for more than three decades. The 50,000 cap proposed by the Trump administration is anti-refugee, un-American, and unacceptable.