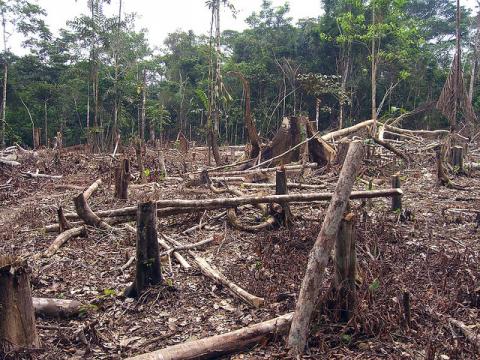 The Paris climate agreement is meant not only to begin a transformation of the world’s energy systems, but also to save the world’s forests.  Dozens of countries put forests at the center of the climate action plans they submitted ahead of the conference. If the plans go into effect in 2020, these nations – particularly tropical countries with rich biodiversity – will commit themselves to sharp reductions in deforestation, and in some cases to ending it entirely.  An important stakeholder in this effort is the World Bank Group.

Photo: Slash and burn agriculture in the Amazon rainforest in Colombia, by Flickr user Matt Zimmerman

As faith based organizations and denominations, we come from unique faith traditions but we share common values to protect God’s creation and the most vulnerable human communities. As world leaders gather in Paris to work together on a global agreement to address climate change, we encourage the World Bank to adopt a Zero Deforestation policy that takes into account forests and forest peoples in all World Bank Group investments.

Forest ecosystems are an important, vital, and sacred gift that sustains incredible biodiversity and indigenous communities. In his encyclical, Laudato Si', Pope Francis recognizes the Amazon and the Congo basins as the lungs of our planet.i He also bemoans the loss of forests as a key source of food and medicinal plants for forest peoples. Concern for trees and forests is also present in other major world traditions such as Islam (Wasaa’il 11), Christianity and Judaism (Deut. 20:19-20), Hinduism (dharma), Buddhism and indigenous faiths.

Forests, in effect, are essential for providing basic human rights such as food, water, air, and land and to preventing climate change. The United Nations Forum on Forest estimated that 1.6 billion people depend on forests.ii

Yet in an independent study of World Bank investment projects, the projects driving deforestation vastly outnumber projects aimed at forest management or conservation. Additionally, the projects driving deforestation not only destroyed complex forest ecosystems but also have restricted or removed land rights for indigenous and other forest-dependent communities, or led to involuntary resettlement.iii

We encourage the World Bank to announce a Zero Deforestation policy at COP21, underway right now in Paris, to ensure forests and forest peoples are protected during development projects. We hope the Bank can support and follow through on a win-win scenario in which the need to protect and preserve forests are thoroughly mainstreamed into future projects, both large and small, and throughout the World Bank Group’s lending portfolio as financing for infrastructure, extractive industries, and agricultural projects can have significant impacts on forests. We look forward to dialoguing with you and other relevant World Bank staff about a Zero Deforestation policy in the near future.