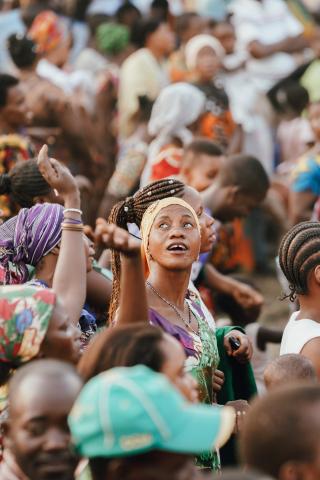 Fr. Jonathan Hill, MM, on mission in Tanzania, writes about the Christian call toward love and creativity.

I once helped a young man open a duka, Swahili for a small convenience shop, in his village in Tanzania, so that he could provide support for his ageing parents. He planned on working hard every day to provide for their needs, and he was very proud of his small shop.

On the day that he opened the duka, his grandmother came and stood in front of the shop, uttered a curse upon him and his shop in front of everyone, and then left. The young man was visibly shaken and embarrassed. He was also scared. Curses hold a powerful effect here in East Africa, and the effect comes largely from the belief in their power. The man believed in the curse, and so he could not prosper under it. The business failed within a few months, and he had to return to the city to try again. This is the power of wivu.

Wivu is a Swahili word that means jealousy. It is a powerful deterrent here for progress in many situations. It stems from a deep-seated desire to see other people suffer more than you. It is the opposite of love.

Our second reading for this week speaks about the power of love, and it is in love that we see real potential and progress. In love we see Creation, and we see God, because God is love (1 John 4:8). I say we see Creation, because love is a creative act, and God, who is Love Itself, creates out of God’s own nature. When we love, we share in the creative act. When we hate, or act with jealousy, we destroy instead of create. Hatred and jealousy are limiting and are strong enough to limit the work of God in our lives (Matt. 6:5). They are the basis of a lack of faith. You see, faith is impossible without love, because the two go hand-in-hand. But with jealousy comes hatred, and love and faith have no room left.

Jesus encounters this jealousy in the Gospel reading for this Sunday. He is in Nazareth, his hometown. He is in the synagogue, reading from the prophet Isaiah before his friends and neighbors. They think that they know Jesus. They knew him as a little child, growing up in their town. They know his family. Jesus claims that the prophecy of Isaiah is fulfilled in him. They are sitting there thinking: “How dare he? Who does he think that he is? We know him. He comes from a poor family in our village. Does he think that he is better than us?” Their lack of faith and even hatred to the point of trying to kill Jesus, comes from their intimate knowledge of him and their jealousy of his success.

Like a Tanzanian who has to leave his village and go to the city where nobody knows him in order to succeed, Jesus had to perform miracles elsewhere. And this is the thing: their jealousy was destructive. If Jesus could perform miracles and be received as the prophet and Messiah that he was in his hometown, he could have transformed their lives. If the young man here in Tanzania was able to grow his business in the village, his grandmother would have benefited. Instead, she chose to curse him.

Are we willing to make room for other people and to praise their success, to live in love and faith in our God and other people? Or, are we living in fear in uncertain times, clinging to what we have, trying to keep other people out, and in the process, preventing our own progress and success? This can be seen in individual lives, in our international borders, in vaccine hesitancy with COVID-19, and in our care or lack of care for creation. We get to choose every day the way we live. Let us choose Love, and in that Love, be a part of creating something new.