Day of Prayer for Asylum Seekers Returned to Mexico 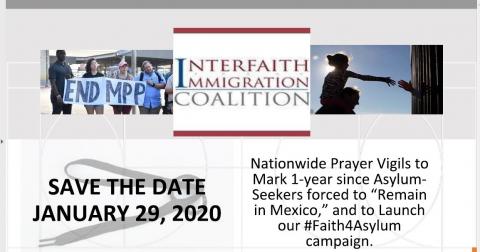 January 29, 2020 will be the first anniversary of the implementation of the "Remain in Mexico" policy, otherwise known as the Migrant Protection Protocols. Under this policy, asylum seekers who come to the U.S.-Mexico border must stay in Mexico while they await their asylum hearings, which can be months away. Many wait in tent camps, lacking basic services and protection from gangs and traffickers.

Faith4Asylum, a new campaign by a network of faith-based organizations, has called for a National Day of Prayer on January 29 to mark the first anniversary of this cruel policy. We invite you to join us in D.C. for a prayer vigil or plan your own local prayer vigil.

•    Find resources for hosting an interfaith prayer vigil to pray for those affected by the policy and for just immigration policy. You can register your local prayer vigil with the Faith4Asylum campaign.
•    Read an article on the damage done by the "Remain in Mexico" policy by Heidi Cerneka, a Maryknoll Lay Missioner working as an immigration attorney in El Paso, Texas.
•    Read and share a backgrounder about the Remain in Mexico policy.
•    Join a webinar on "Remain in Mexico" from the Justice for Immigrants campaign of the U.S. Catholic Bishops' Conference on January 23 at 2 p.m. EST.
•    Email your Members of Congress asking them to oppose this cruel policy.