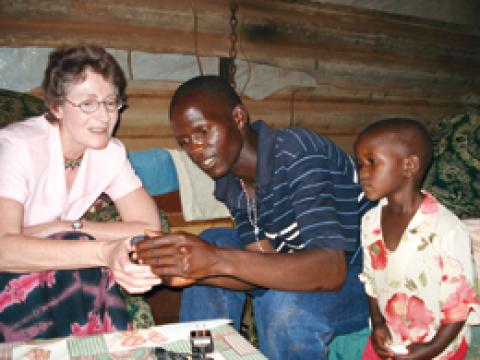 The following reflection on the growing protest demonstrations in Zimbabwe was written by Maryknoll Sister Janice McLaughlin, former president of the Maryknoll Sisters and a longtime missioner in Zimbabwe. You can read more about Sister Janice at https://maryknollsisters.org/mk-sister/sister-janice-mclaughlin/. This article was published in the September-October 2016 issue of NewsNotes.

I returned to Zimbabwe in 2015, after an absence of almost seven years. My initial impression was that much had improved while I was away. I left in 2008, one of the most horrendous years for Zimbabwe. Inflation was the highest in the world. We had one hundred trillion dollar notes that were worthless. There was no fuel and no food in the shops – everything was traded through the black market. One became an expert at finding where to get what one needed and to know how to pay for it, either with U.S. dollars or in a barter deal.

Worst of all in 2008 was the terrifying violence that was carried out after the elections that year when the opposition party made big gains and President Robert Mugabe’s ZANU-PF party lost in most parts of the country. Many in the ruling party appeared furious. They retaliated against voters by ordering police to beat, maim, and kill citizens in the hundreds if not thousands. I chaired a group that provided medical aid to the victims of violence and saw with my own eyes the bruised, broken and bloody bodies. It was heart-breaking and terrifying.

When I returned seven years later, the city of Harare seemed quite peaceful and almost as beautiful as I remembered it from years past. The jacaranda trees lining the main streets were in full bloom and people were friendly and welcoming. The shops were full of food and electronic goods. The internet worked smoothly and the youth sported expensive sneakers and cell phones. It was a far cry from the Harare that I left seven years previously.

As time went on, however, I began to see the poverty hidden beneath the outward prosperity. I met former students who had married and were struggling to feed their families because they were without jobs. Unemployment was over 80 percent and many youth left the country in search of work in South Africa, Botswana, or further afield. In fact, the children of most of my friends were living and working abroad – in Australia, Canada, or South Africa. While food in the shops was plentiful, it was imported from South Africa and was very expensive. Local services such as provision of water and electricity were erratic and also expensive. Most of all, I began to sense people’s lack of hope for the future.

President Mugabe and most of his senior staff had been in office since Independence, 36 years ago. They showed little sign of willingness to hand over leadership to a younger generation with new ideas.

Corruption was endemic. I dreaded running into police road blocks, for instance, since the police inevitably found something wrong and demanded $20, whether one was guilty of a traffic offense or not. Failure to pay could result in a smashed windscreen or a visit to the local police station.

The next crisis was a lack of currency in the banks. The country had run out of cash and banks were not allowing customers to withdraw more than one hundred dollars from their accounts at a time. Soon the government did not have the funds to pay the salaries of teachers, nurses, and doctors. Even the police and army were being paid a week late. I attended a meeting held by churches with the Governor of the Reserve Bank who tried to explain why the country was bankrupt. “We know and trust you,” one of the pastors said in response to the Governor’s sincere attempt to explain. “We don’t trust your bosses. We know you have no power to end the corruption, restore jobs, and create food security.” Another pastor wanted to know if the country would recover any of the $15 billion that the president has recently announced was missing from the diamond mine revenue. His question was met by laughter and applause.

This meeting reflected the new mood of self-confidence and courage that was emerging across communities. To explain this change, in April, a friend showed me a video on social media by a 39-year old Zimbabwean pastor wearing a Zimbabwean flag draped around his neck. He spoke of the need to overcome fear and to speak out against corruption, unemployment, and economic mismanagement. “This is our country. Only we can save it,” he announced. His name was Evan Mawawire and he used the hastag #ThisFlag. My friend went out that afternoon to buy a flag. I followed her example a day or two later. It was a sign of solidarity with the pastor and others like him who were speaking out against the problems besetting the country.

Very soon, flags were on sale on every street corner. Motorists placed them on their dashboards; people waved them in the streets and wrapped them around their bodies.

One of the first protests that was organized was a national shutdown in July. Posts promoting the shutdown on social media read: “No-one should go to work or to vending. No one should go to school. No shop should open. No vehicle should move. No office should open – It’s our Salvation Day. Let’s shut down everything for a day to save ourselves forever! No one can save us – let us unite and save ourselves peacefully NOW!”

An estimated 90 percent of the population heeded the call. The shutdown coincided with a strike by doctors and nurses who had not been paid and was a huge success. Bus and taxi drivers also organized a protest about the bribes they were forced to pay to the police. Inspired by the success of the “This Flag” movement, other protest movements sprang up. “This Gown” was led by unemployed graduates who wore their caps and gowns while marching to Parliament to draw attention to the lack of jobs for college graduates. Some of them continue to wear their academic gowns daily while selling fruit and vegetables on the streets since vending is the only avenue left to make a living. An activist group of women, Women of Zimbabwe Arise (WOZA), took to the streets with pots and pans to highlight the lack of food to give their children. Catholics, Protestants and Evangelical churches issued a joint statement that echoed the demands of the protestors, calling attention to corruption, unemployment and economic mismanagement. The church leaders continue to meet and plan together how to respond to new developments.

One of the most serious threats to the 92-year old president and his ruling ZANU-PF party was a statement signed by a large number of veterans of the liberation war. The statement accused President Mugabe of being autocratic and out of touch with the needs of the people. “We note, with concern, shock and dismay,” they stated, “the systematic entrenchment of dictatorial tendencies, personified by the President and his cohorts, which have slowly devoured the values of the liberation struggle in utter disregard of the Constitution….” In a final blow to the President, the war veterans said that they would not campaign for him in the 2018 elections.

Has the country reached a tipping point?

A major difference between protests of the past and the current protests is the fact that they are not being led by political parties. The current protests are coming from ordinary people and a younger generation who are weary of the hardships of daily life and are discovering a new urgency, courage, and strength. This may be a nationwide political awakening.

Pastor Mawawire was arrested in July and charged with inciting public violence. In a rare show of solidarity, thousands gathered outside the courthouse to sing hymns and pray for his release. Nearly one hundred lawyers came to the court and volunteered to defend him. The judge threw out the charges and Mawawire emerged to a sea of candles and cheering supporters.

A few weeks later, several leaders of the veterans group faced the same treatment and also received a show of support from lawyers and the public. After their release, the ruling ZANU-PF party expelled the veterans from the party and from the Association of War Veterans. Unrepentant, they have formed a new political party, vowing to expose the lies that have been told over the years.

Although Pastor Mawawire has left the country after receiving threats against his life, the protest movement he helped to start shows no sign of abating, despite increasing violence by police toward demonstrators and a government ban on protests in the capital, Harare, for the first two weeks of September.

New voices are rising up and new actions are being taken to confront the serious economic and political problems facing the country. The calls for President Mugabe to step down are growing louder and are coming from different groups. The most recent is from “The Elders,” a group of prominent African leaders that includes Archbishop Desmond Tutu, former UN Secretary General Kofi Annan, and Graca Machal, widow of South African Presidents Nelson Mandela and Samora Machel. The Elders have delivered a petition to SADC, the Southern African Development Community, which will hold its annual assembly in Swaziland in September. A similar petition is to be delivered to the African Union, and other prominent organizations.

Within Zimbabwe, a coalition of opposition parties, now numbering 18, has been holding weekly demonstrations, calling for electoral reform. It is too soon to tell whether the government will succeed in wearing down the voices of dissent and scaring them back into submission. We can only hope and pray that a new beginning is near that will end the suffering and give birth to a renewed hope and the fulfillment of dreams, long deferred.