World AIDS Day: “Moving forward, leaving no one behind” 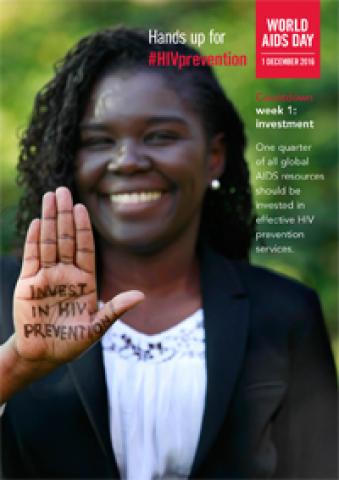 Since 1988 World Aids Day is commemorated on December 1 as a day to remember those who have died of AIDS and to unite people around the world in the fight against HIV/AIDS. Maryknoll Missioners at the UN and in countries around the world commemorated this important day. The following article was published in the January-February 2017 issue of NewsNotes.

On World AIDS Day this year a special event “Moving forward together, leaving no one behind” was held at the UN headquarters in New York to commemorate World Aids Day and to honor UN Secretary General, Ban Ki-Moon, for his commitment and leadership in the fight against HIV/AIDS.

Erick Sawyer, founder of the global HIV treatment access movement and retired UNAIDS staff member, talked about origins of HIV thirty years ago when newspaper articles revealed the existence of a virulent new disease that affected gay men, drug users and sex workers.  This news instilled panic in the hearts of a fearful public that responded with hostility, discrimination, and stigmatization towards those suffering and dying of AIDS.

Out of discrimination and hostility, a new generation of leaders emerged. People who themselves were living with HIV took on the role of caring for and supporting others who had contracted HIV and were dying of AIDS. These new leaders fought for the right to education, prevention and treatment of the disease.

Then in 1988 the World AIDS Day was created and is now a day dedicated to raising awareness, mourning friends and family lost to AIDS as well as lobbying for funding that is used to advance the diagnosis and treatment of HIV/AIDS. The availability of sufficient funding will help advance scientific research with the hope of finding a vaccine that will lead to better prevention or even a cure.

As a way to remember those who died and to show solidarity with those living with HIV, many people wear red ribbons on December 1. This is also to pay tribute to the more than 35 million people who have since died of AIDS and a moment of silence was dedicated to their memory.

'Leave No One Behind'

The 2030 Agenda for Sustainable Development at the UN promises to “move forward together and leave no one behind” in the campaign to end the AIDS epidemic. It builds on UN Secretary General Ban Ki-moon’s “Global Plan towards the elimination of new HIV infections among children and keeping their mothers alive” which was launched when he visited Kenya in 2011.

In Kenya,  Ban Ki-moon met Rebecca Awiti and her triplets, beneficiaries of an effective treatment that prevented her from passing HIV to her children who were born free of HIV. During the event this past December 1, Awiti thanked the UN for bringing “hope to me, my children and my children’s children that an AIDS-free generation is possible in our lifetime.”

Michel Sidibé, Executive Director of UNAIDS said, “When we said we did not want babies to be born with HIV, people thought we were dreaming. Today, countries are showing that it is possible. We have been able to double the numbers of children put on treatment in less than five years. We have more than 73 percent of pregnant women who are HIV positive today who are covered by those services.”

The commemoration of World Aids Day raises the need to empower everyone in the fight against the spread of HIV/AIDS. Maryknoll Sister Mary Annel, a doctor in El Salvador, is one of many Maryknoll missioners around the world who does just that. In her latest communiqué she says, “Three of our friends who live with AIDS in El Salvador visit the homes of people living with HIV who are not faithful to their treatment-both new and old patients. They tell people with the disease that it is possible to take their medicines and to live a productive life and support their families. They are wonderful ads for their disease and its treatment.”