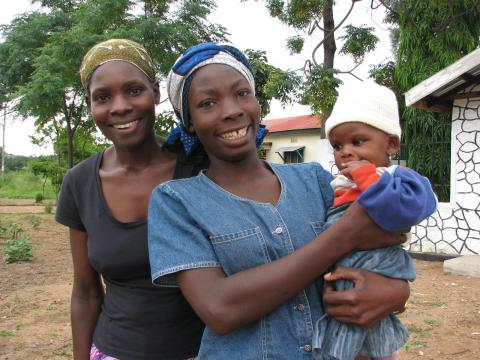 "In no other area is our collective failure to ensure effective protection for civilians more apparent…than in terms of the masses of women and girls, but also boys and men, whose lives are destroyed each year by sexual violence perpetrated in conflict." (UN Secretary General Ban Ki-moon)

The dignity and personhood of women can only be realized when women are honored as equal members of our global community, using their gifts of intellect, intuition, understanding and compassion for all, in pursuit of a world of peace and justice. Sadly, this has not been their reality. Women and girls are targeted as a tactic of war to humiliate, dominate, create fear, punish, disperse and/or forcibly relocate members of a community or ethnic group. Sexual violence exacerbates conflict and perpetuates insecurity in the wake of war. It holds entire communities hostage, and has an economic, social, cultural and inter-generational impact: women cannot access water-points and markets; children cannot safely get to school; "war babies" are ostracized. (UN Women)

Since its opening in the summer of 2005, marking the 60th year since the end of World War II and the tenth year since the Beijing Conference on Women, the Women’s Active Museum on War and Peace in Tokyo has demonstrated its commitment to retrieving the painful memories of wartime sexual violence and creating a setting in which the stories of "comfort" women who were victims and are survivors of that violence can be retold, and healing can begin.

The museum has helped sustain international attention on the process and findings of the Women’s International War Crimes Tribunal, which made sexual slavery a symbol of wartime violence against women and gave women around the world, especially those caught in the violence and tragic aftermath of war, new hope. The proceedings of the Women’s International War Crimes Tribunal, and its ruling that the Japanese military sexual slavery system was a war crime according to international laws then in force made a tremendous contribution to exposing the gendered nature of war crimes and to ending the impunity with which wartime sexual violence has been committed against women around the world.

The Women’s Active Museum on War and Peace has become a center for women activists aiming to stop war, eliminate all forms of violence in war and conflicts, ensure the protection of women’s human rights, and contribute to reconciliation in the Asia/Pacific region.

In October 2000, the UN Security Council passed unanimously Resolution 1325 to recognize the importance of including women in matters of peace and security. It recognizes that women are disproportionately affected by conflict and calls for their active participation at all levels of decision-making in conflict prevention, conflict resolution, peace processes, post-conflict peacebuilding and governance. SCR 1325 further calls for the effective protection of women from sexual and gender-based violence in conflict settings, for the mainstreaming of gender perspectives in all aspects of peace operations, and for the promotion of women’s rights and gender equality.

The Women’s International League for Peace and Freedom (WILPF) and many other women’s organizations around the world insist that Resolution 1325 is not merely "a tool for making war safe for women," but a way to advance the status of women everywhere and prevent future wars.

In 2008, Security Council Resolution 1820 recognized conflict-related sexual violence as a matter of international peace and security. It calls for armed actors to end the practice of using sexual violence against civilians to achieve political or military ends, and for all parties to conflict to counter impunity for sexual violence and provide effective protection for civilians. It also calls on the United Nations and peace operations to develop mechanisms to prevent and respond to sexual violence, including through the training of personnel, the deployment of more women to peace operations, the enforcement of zero-tolerance policies and strengthening the capacities of national institutions.

Despite the passage of Security Council Resolutions 1325 and 1820, according to the United Nations, women’s participation in peace negotiations remains ad hoc, not systematic, averaging less than eight percent of the 11 peace processes for which such information is available. Fewer than three percent of signatories to peace agreements are women.

No women have been appointed chief or lead peace mediators in UN-sponsored peace talks, but in some talks sponsored by the African Union or other institutions women have joined a team of mediators. A positive case is the role of Graça Machel as one of the three mediators for the Kenya crisis in 2008.

Out of 300 peace agreements for 45 conflict situations in the 20 years since the end of the Cold War, only 18 have addressed sexual violence in 10 conflict situations (Burundi, Aceh, Democratic Republic of the Congo, Sudan/Nuba Mountains, Sudan/Darfur, Philippines, Nepal, Uganda, Guatemala, and Chiapas). With regard to trials of sexual violence as a war crime, crime against humanity, crime associated with genocide, and use in torture, sexual violence has been the "least condemned war crime." At the International Criminal Tribunal for Former Yugoslavia, 18 decisions resulting in convictions are related to sexual violence. The number is lower in other courts: eight in the International Criminal Tribunal for Rwanda, and six in the Special Court for Sierra Leone.

Much more political will is needed to include wartime sexual violence in peace negotiations, and women must be included in negotiation process. As victims of social inequity women’s expertise must be honored.

The Nobel Women’s Initiative and the Women Peacemakers’ Program at the University of San Diego give insight into the work of women peacemakers.