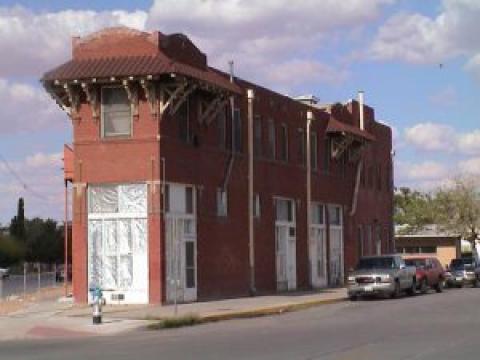 When Maryknoll Sister Lil Mattingly in El Paso, Texas, shared the urgent need for volunteers to help the growing numbers of refugees and migrants there, the Maryknoll Office for Global Concerns sent Alfonso Buzzo, our peace fellow, to live and work at Annunciation House, a home of hospitality in El Paso. The following article is Alfonso’s reflection on his month-long experience there. The following article was published in the January-February 2017 issue of NewsNotes.

“One comes to appreciate the reality that there can be no ‘we and they’ in our lives,
but only brothers and sisters, all sacred and dignified.”
– Dr. Martin Luther King, Jr.

Annunciation House (pictured on right) provides shelter to underserved immigrants, asylum seekers, and refugees at several houses of hospitality in El Paso. It is currently receiving over 1,000 migrants each week, most of them from Central America and just released by U.S. Immigration and Customs Enforcement.

Without hospitality centers like Annunciation House, these vulnerable people would be released to the streets. Instead, they find a place to stay, clean clothes, meals, showers, and assistance in contacting family and planning to travel onward.

Many newspaper and magazines articles, and even documentaries, have been written about the terrible things that many migrants have experienced along the U.S.-Mexico border. There are stories of murder, rape, theft, kidnapping, days spent in holding cells where refugees are treated like criminals, forced to wear ankle monitoring devices and even separated from family by U.S. Border Patrol agents for no apparent reason.

Recent immigrants have been known to experience aggressive searches by security at U.S. airports and attitudes of disdain and hate from lots of people. These are a very real part of the migrant journey to the U.S.

Having lived and worked there allowed me to see amazing and wonderful things as well – especially compassionate responses from people who just want to help. I would like to share some of those stories.

Unexpected family reunions are an unbelievable joy to witness. Immigration officers often separate families traveling together. If a father or mother is traveling with children, the father may be sent to a detention center where he will sit for many months until he is deported, while the mother and children go on to join their family somewhere in the U.S.

We welcomed such a family at Annunciation House – a father, mother, and three children. The father and teenage son were detained in one place and the mother and two younger children to another. Each family group sat in a holding cell for over 10 days with no idea what was happening to the other group.

Immigration officers brought the mother and little children to one of our houses on a Monday. The father and the teenage son were brought to a different house on Tuesday. Neither the volunteers nor the family knew both groups were in our houses until Wednesday, when for unrelated logistical reasons we assigned the father and son to the same house as his wife and other children. Imagine the very emotional, tearful reunion when they just happened to see each other in the hallway!

Another time, we had two families sharing a room in one of our shelters. One family – a woman and her children – couldn’t gather enough money from relatives for a bus ticket to the relatives’ home in another part of the U.S. Imagine the tears when her roommate’s relatives bought the bus tickets for her. These two women only met the day before and they were not even from the same country!

When some of our guests leave Annunciation House, they travel by airplane to their relatives’ homes around the U.S., if their family members have been in the U.S. for many years and have the financial means. Imagine never having seen an airport before, and then being forced to find a connecting gate in a massive airport in Chicago or Atlanta, where few people speak Spanish.

One day we received a phone call... It was from an American woman who said she found a Guatemalan woman and her two children lost in an airport. Turns out the Guatemalan mother could not find her gate, was afraid to ask for help, and missed her flight. This American woman offered to drive the Guatemalan family five hours to their final destination – ten hours round trip for her. Amazing!

Pope Francis' pledge resonated with me on the U.S.-Mexico border: “I prefer a church which is bruised, hurting, and dirty because it has been out on the streets, rather than a church which is unhealthy from being confined and from clinging to its own security.”

Learn more about Maryknoll Sister Lil Mattingly on mission along the U.S.-Mexico border at https://maryknollsisters.org/mk-sister/sister-lelia-mattingly/