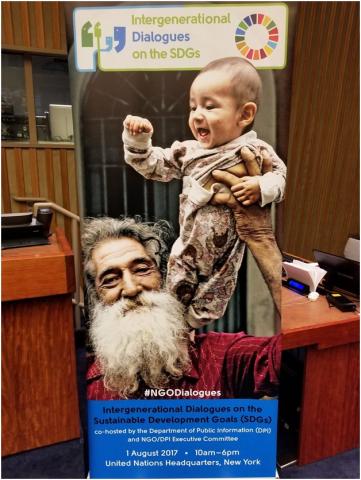 Maryknoll Sister Elizabeth (Claris) Zwareva, who represents Maryknoll at the United Nations, reports on the latest efforts at the UN to incorporated intergenerational dialogue in efforts to achieve the Sustainable Development Goals. The following article was published in the September-October 2017 issue of NewsNotes.

On August 1, the United Nations Department of Public Information Non-Governmental Organizations (DPI-NGO), in collaboration with the NGO-DPI executive committee co-organized “Intergenerational Dialogues on the Sustainable Development Goals (SDGs).” Two years earlier, UN member states adopted seventeen SDGs to end poverty, protect the planet, and to ensure human rights and prosperity for all by 2030. The purpose of the six intergenerational dialogues was to raise awareness that although society has considered young people and older persons as beneficiaries of social development, they are also contributors to the agenda.

António Guterres, UN Secretary General, addressed the audience via video message in which he expressed appreciation of the contributions of civil society, and in a special way, the contributions of youth and elderly persons towards the achievement of the sustainable development goals (SDGs). He thanked the non-governmental organizations for their active collaboration with the United Nations bodies and their contribution towards the achievement of the SDGs.

Echoing the Secretary General’s message, other speakers urged young people and older persons to unite to build bridges that will facilitate dialogue, knowledge exchange, and effective solutions to current problems. The dialogues were the beginning of such an effort.

The talks were organized under the following titles: breaking the intergenerational cycle of poverty; gender equality: opening the door to full inclusion; access to employment throughout life; sharing responsibility for the planet; intergenerational innovation; and healthy living: physical and mental wellness.

Real life stories highlighted the importance of intergenerational collaboration in efforts to achieve the SDGs. A young immigrant woman shared how her life was changed when she was given a violin that was donated by Joseph Feingold, an immigrant and a Holocaust survivor. Joseph and Briana, donor and recipient, stood side-by-side at the podium showing how their stories converged in Joe’s violin (http://www.joesviolin.com/). The violin was the bond that united the elderly man, who had kept the violin for its memories but no longer played, to this young woman whose life was just beginning and for whom the violin was the door out of a life that was falling to pieces.

The intergenerational dialogues showed how bonds established through a common cause have the potential to transcend race, ethnic background, gender, and age among many other aspects of life. Hope is born when the dreams of young persons are guided by the wisdom of older persons; a convergence of wisdom and innovation. As stated in the 2030 Agenda, “we can be the first generation to succeed in ending poverty, just as we can also be the last generation to have a chance of saving the planet.” One of the speakers summed up the message of the Intergenerational Dialogues by saying, “When people have a common purpose, age doesn’t matter.” Our purpose is to end poverty, to foster peace and intergenerational harmony as a means to fully harness the potential embodied in the young and the elderly as a means towards achieving sustainable development.

As Christians, we read in Scripture about Mary’s visitation to her cousin Elizabeth, two women from different generations who affirmed life and dignity as they each brought new life into the world. In the same way, the relationship of young and old offers society a path to converge wisdom with innovation and thus “peace and justice embracing” (Psalm 85)