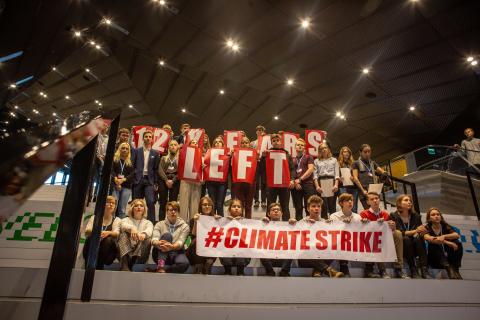 With the latest reports on climate change from the United Nations and the U.S. government sounding alarms, world leaders have failed to rise to the challenge of the climate crisis. The following article was published in the January-February 2019 issue of NewsNotes.

The UN released a special report in October that says the world has twelve years to take action if we are to keep Earth’s overall global average temperature increase to 1.5ºC (or 2.7ºF). Two months later, 13 U.S. government agencies released the fourth U.S. National Climate Assessment, a yearly report mandated by Congress, that says the United States is already feeling the impacts of climate change and that these impacts will only grow more severe. When asked by the press, President Trump said he does not believe his own administration’s report.

At the same time, world leaders met in Poland in December to follow up on the 2015 Paris climate agreement at the annual UN climate change conference. Held in the coal mining city of Katowice, this gathering was considered by many to be the most consequential climate conference since Paris.

The goal of the Paris agreement is to keep Earth well below 2ºC and to pursue efforts to limit the temperature increase even further to 1.5 degrees Celsius. The difference between a 1.5ºC and a 2ºC world is vast in it’s consequences for the environment, as this infographic from the World Wildlife Federation illustrates.

In Poland, negotiators from 174 nations and the European Union met to both assess the collective impact of their “nationally determined contributions” and to begin to discern new commitments to be announced in 2020. They also gathered to finalize how the Paris Agreement will be operationalized, also known as the “Paris Rulebook.”

These contributions include finance to mitigate the impacts of climate change and to assist communities and countries in adapting to the new climate reality. Negotiators also discussed ways to to share technologies developed by rich countries with middle and low income countries. As of yet, countries have failed to agree to financing loss and damage to assist countries that end up underwater or whose land becomes completely uninhabitable. This is of critical importance to small island nations and sub-Saharan African countries.

Outcomes of the conference

Ultimately, political stagnation trumped the bold and necessary systems change that the climate challenge needs. Advocates who pushed for bolder reforms faced a culture of fear by the host country.

By the end of the conference, civil society (including faith-based organizations such as our partner CIDSE) gathered in the conference halls to protest the weak outcomes and their failure to rise to the challenge of the climate crisis. Youth and young adults played a critical role in both this protest and others throughout the week.

Laurence Blattmer, a Dominican representative at the UN commented, “Overall, I feel quite disappointed with the results, especially in terms of the content of the Paris Rulebook. References to human rights have been taken out completely. Next year’s conference will be hosted by Chile. We hope that this country, strong on environmental democracy, will put pressure on all States to step up their climate ambition. Despite this, I was happy that the Dominicans could be present at the conference, thanks to an invitation from the Mayknoll Sisters.”

Leading up to the conference, Poland began restricting freedoms and expanding penalties for protest. Some conference participants, especially civil society members from Eastern Europe, were detained, prevented entry, or expelled from the country during the conference. Activists took to the streets to oppose the crackdown.

President Trump announced his intention to pull the United States out of the Paris agreement in 2017. Since then, the Trump administration has been steadily gutting federal regulations on oil, coal and gas emissions and expanding fossil fuel operations.

In Poland, U.S. negotiators joined Russia, Saudi Arabia and Kuwait to oppose a vote to “welcome” the findings of the UN special report which calls for decisive climate action within the next twelve years.

Brazil’s new far-right government, which hopes to align closely with the Trump administration, is considering pulling out of the Paris Agreement. Brazil already withdrew their offer to host next year’s UN climate conference, which will now be hosted by Chile.

Polls show that the majority of people in the United States believe climate change is real, human caused, and requiring action. State and local governments, faith communities, businesses, and everyday people are moving forward. As a new generation comes into power, climate change is becoming a higher priority The new Congress plans to introduce a “Green New Deal” – a roadmap for action to keep us within the 1.5 orbit.

Image: "12 Years Left" placards at climate strike at COP24 in Poland. Thirty school children from three local schools in Katowice volunteered to bring a climate strike into the final day of the UN Climate talks in Katowice. The students were granted special access to enter the UN talks and carry their message to the delegates and Polish government. Their statement was "With only 12 years left to get the world off fossil fuels, leaders must act now." (Photo credit: David Tong / WWF New Zealand, Flickr/Public Domain.)