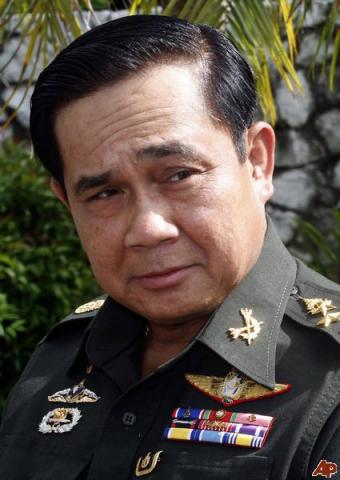 On May 22 General Prayuth Chan-ocha (right) led the Thai army in a coup which ended for the time being Thailand’s experiment in electoral democracy. After shutting down a dozen television stations and thousands of community radio stations, the military controlled the public’s access to news, imposed martial law, and detained both government and opposition leaders.

This coup ended seven months of street protests and political impasse between the government of the elected Pheu Thai party and the old establishment which had taken to the streets when it became evident that they didn’t have enough popular support to win elections.

The economic impact of the political crisis and the subsequent coup are threatening to dry up foreign investment and the tourism industry on which Thailand depends. Even before the coup the state planning council announced that the Thai economy had lapsed into recession.

Behind the political and economic uncertainty loom royal succession worries: the era of the revered King Bhumibol Adulyadej is coming to an end. At 86-years old, the king is frail and seldom appears in public. His heir apparent, Prince Maha Vajiralongkorn, is something of a playboy and widely unpopular among Thais.

Thailand’s last coup, in 2006, lasted a year. Many observers fear this one will last a lot longer. Meanwhile, Thailand was condemned in June as one of the worst countries in the world for human trafficking in the U.S. State Department’s annual report on trafficking of persons. This report followed a series of revelations in the press of government officials selling Rohingya refugees from Myanmar to human traffickers, as well as forced labor in Thailand’s seafood industry. The State Department report states that thousands of trafficking victims end up in Thailand as migrants from neighboring countries "who are forced, coerced or defrauded into labor or exploited in the sex trade."