Sudan: War in the north continues 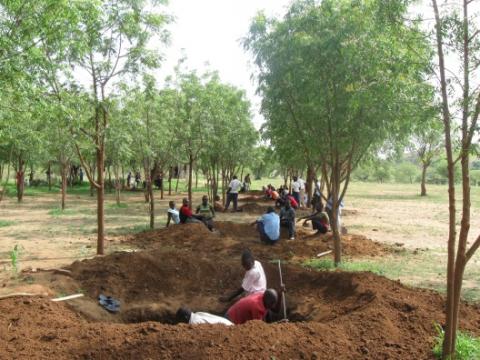 As South Sudan’s fractious leaders struggle to fend off a potential civil war, the other Sudan – the Republic of the Sudan – continues to wage a vicious military campaign against civilians in the Nuba Mountains area of Southern Kordofan province. The same aerial bombing techniques used in previous campaigns are once again targeting schools and hospitals.

Maryknoll missioner priest Tom Tiscornia, who lived through and witnessed some of the bombing of the earlier conflict, now lives in Gidel, Sudan near the recently bombed Mother of Mercy hospital. In a recent email he reported about an attack by the Sudanese airforce: "Well, today we were in and out of the foxholes. Just after the Form 2 Christian Religious Exam, around 10:30 am, we were in the holes outside the secondary school for half an hour as the Antanov bomber continued to circle over. Later at 1:30 pm we were in the holes again near our home -- this time the bombs hit near our primary school with over 500 students, really close -- too close for comfort, the kids have to be scared out of their minds. Again, just half hour ago a MIG flew by here at the hospital. I’m back into another foxhole. While in the hole at the secondary one of the students asked me, ‘Why are you here - aren’t you afraid?’ Fear is a part of the life for the people of Nuba. Be well and keep us in your prayers."

In its June 25 update on the situation in South Kordofan, Amnesty International (AI) reports that the renewed attacks on villages in this region that borders South Sudan may constitute war crimes. AI bases its assessment on satellite images that show homes, hospitals and schools like the one where Fr. Tiscornia teaches have been targeted. This photo (above) shows part of a bomb shelter. The school is in the background. The students and teachers have taken to digging even more foxholes in preparation for future bombing raids.

The current bombing attacks in the Nuba Mountains coincide with the planting season, a strategy to prevent food production which in turn leads migration out of the area. At the same, the government of Omar Al-Bashir makes sure humanitarian assistance is prohibited from entering the "war zone." Like their neighbors in South Sudan, residents of the Nuba Mountains are facing a humanitarian disaster. AI estimates that over 800,000 people are displaced or otherwise affected by this military operation dubbed "Decisive Summer."

According to the International Crisis Group (ICG) the dynamics of the current war in Sudan are different from those of earlier conflicts. Now the Sudanese People’s Liberation Movement-North (SPLM-N) is better armed and larger than in the past and has made alliances with similar groups in Darfur such as the Sudan Revolutionary Front (SRF). The Government of Sudan’s forces have also been expanded to over 30,000 soldiers. But in the present conflict, they are losing support of some traditional allies. The ICG notes that "Arab tribes that previously supplied militias that did much of the fighting no longer support the government wholeheartedly; significant numbers have joined groups fighting Khartoum. The conflict shows every sign of strategic stalemate."

As with many other conflicts in Africa and around the world, some of the root causes can be found in the political marginalization of certain groups, the loss of access to farming and grazing land due in part to land grabs, and the long list of unimplemented promises of political and economic inclusion. Hopefully, these and many other important security and development issues will be on the agenda of the U.S./Africa Leaders’ Summit that will take place next month in Washington, D.C. (See related article here.)