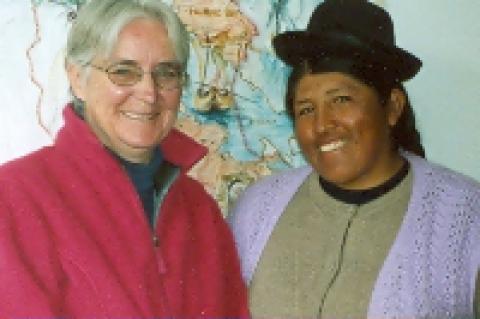 The following article on the effects of trade agreements on an indigenous community in Peru was written by Alfonso Buzzo, Peace Fellow with the Maryknoll Office for Global Concerns. This article was published in the September-October 2016 issue of NewsNotes.

Maryknoll missioners around the world have witnessed the negative impacts of certain trade agreements that challenge national laws and regulations protecting public health, the environment, and human rights. One of the most controversial elements of a number of bilateral and multilateral treaties is “investor-state dispute settlement” which grants corporations the right to sue nations in the International Center for Settlement of Investment Disputes (ICSID), a private court housed in the World Bank Group in Washington, D.C.

Companies have been increasingly using the investor-state dispute settlement structure to dispute the right of nations to regulate public concerns, particularly, environmental and labor conditions. These lawsuits are extremely costly, forcing developing countries to divert funds away from critical infrastructure projects and the social safety net for its citizens.

First, in 2014, Canadian mining company Bear Creek lodged a claim against Peru for $522 million in damages at the ICSID. They argued that the Peruvian government’s decision to cancel the Santa Ana mining project in the southern Puno region in 2011 violated obligations under the Canada-Peru Free Trade Agreement.

The government of Peru canceled the Santa Ana mining project after police killed six members of an indigenous community and injured dozens more during protests against the mine. The Aymara and Quechua indigenous people feared that the mine would pollute their water supply and push them off their land. Maryknoll Sister Patricia ‘Pat’ Ryan is there, working with the Center for Human Rights and the Environment, a local NGO which offers educational services, information, and legal advice to indigenous people who are nonviolently addressing irresponsible mining activities that violate their rights, threaten the environment, and pollute their water supply. You can read more about Sister Pat at http://bit.ly/2cn8r7h.

The case will be heard in Washington, D.C from September 7-14. Sister Pat and other members of the local NGO in Peru plan to be there to represent the rights of the indigenous communities.

A second investor-state dispute case has been filed against Peru – this one claiming $800 million in damages. The Renco Group, an American investment consortium that purchased a huge smelting plant in La Oroya, a small city situated 110 miles northeast of Lima, filed arbitration in 2011. Once again, this case was permitted by a free trade agreement.

The Renco Group claims that Peru’s enforcement of environmental regulations is both too costly for the company and surpasses the company’s expectations, thus allegedly violating its rights as an investor. It is worth noting that La Oroya continues to be one of the most contaminated cities in the world, according to a 2007 report by the Blacksmith Institute, an environmental organization.

Even though the tribunal dismissed Renco’s case on technicalities in August, the dispute is not over. The company reserves the right to file additional arbitration in ICSID, and according to Rev. Jed Koball, facilitator of the Presbyterian Hunger Program's Joining Hands in Peru, this is probably what they will do.

The newly inaugurated Peruvian president Pedro Kuczynski, a former investor banker, has stated that reinitiating mining operations in La Oroya will be a priority for his administration. To do so, environmental standards set in 2001 would need to be relaxed.

This is why we support the work of Sister Pat and the people of Santa Ana, and we meet with staff of congressional offices and the State Department, and we advocate for trade reform, so foreign investors do not have rights that surpass the rights of men, women, and children to good health and wellbeing.