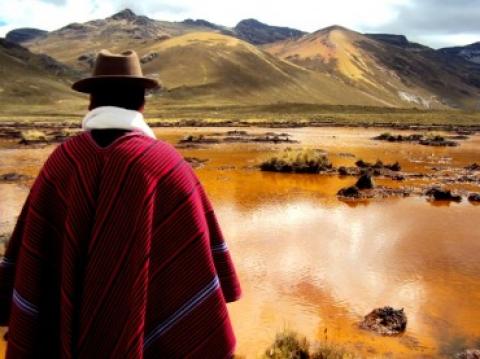 Maryknoll Sister Pat Ryan on mission in Peru is a member of the NGO Human Rights and the Environment; she is the source of the information in this article regarding the community of Condoraque. The following article was published in the September-October 2012 NewsNotes.

After World War II the United Nations was established as an institution to bring forth peace and human security, to be accomplished through freedom and development. Throughout the past six decades the UN has kept this vision in sight even though human reality has been far more complex than could have been imagined in the 1940s. Sixty years ago it would have been difficult to imagine that the course of human development would threaten Earth’s seemingly endless supply of natural resources, including water.

By the 1970s, however, it was apparent that development would need to be reframed because its trajectory was unsustainable for the long run and negative widespread environmental effects were already very obvious. Also, hard won political freedom in emerging nations was undermined by failure to establish just and equitable standards for the use of economic resources.

Now, through decades of work, the UN has established the concept of sustainable development that takes into account the economic, social and environmental needs of contemporary people and nations while not forgetting the rights of future generations to meet their needs. The recent Rio+20 Conference renewed international awareness regarding the need for all nations to work together for a sustainable future according to a coherent plan. Once again, the commitment to peace for all people was affirmed as the goal, but this time with a more nuanced expression of what constitutes freedom as it relates to sustainable development. The following is from the common vision statement of the Rio+20 outcome document:

We recognize that opportunities for people to influence their lives and future, participate in decision-making and voice their concerns are fundamental for sustainable development. We underscore that sustainable development requires concrete and urgent action. It can only be achieved with a broad alliance of people, governments, civil society and the private sectors, all working together to secure the future we want for present and future generations.

The significance of these words is shown through the experience of the Peruvian altiplano community of Condoraque. The plight of the Condoraque community was related in NewsNotes two years ago, in July 2010. In summary, the lives of this small rural community of Aymara people were entirely disrupted through large-scale invasive mining operations. The community’s water became contaminated due to toxic tailings, the people became ill, livestock were destroyed and livelihood lost.

There was no consultation with the community before the mining operations began and no clean-up or restoration when the operations were abandoned. Recently, a second mining company began operations in the area. However, before proceeding, the company was to conduct an environmental impact assessment and the findings were to be transmitted to the community. Furthermore, the new company promised the people of Condoraque that before proceeding with new operations, they would completely restore the site destroyed by the first company and submit a specific plan for closing their own operations when their work was completed. These were essential conditions of the community’s consenting to the new operations. Unfortunately, the company began mining without transmitting the findings of the environmental impact assessment, ignored its promise to restore the land and water previously contaminated, and no closure plan was submitted.

Regrettably, these circumstances are multiplied throughout the world and illustrate a generalized failure to take into account social and environmental needs and requirements in the planning and implementation of economic enterprises, especially of the extractive type. Clearly, such practices are not conducive to peace; rather, they lead directly to widespread unrest.

Fortunately, a new chapter has been added to the Condoraque story. On April 24, 2012, a judicial decision established that the community of Condoraque had presented sufficient evidence to warrant opening a legal case against the mining company. This decision was contested by the lawyers representing the company. Then, the community’s lawyer, from the NGO Human Rights and the Environment, invited the company’s attorney and other concerned parties to actually visit the devastated sites. Although with reluctance, all parties agreed to a site investigation. Everyone’s safety was guaranteed by the NGO; this was essential given that the non-indigenous professional people representing the company were afraid of the indigenous people who had been successfully marginalized for centuries and were justifiably angry.

On the agreed upon date all parties presented themselves and were able to see the absolute devastation of the land and water. Beyond this, they met with the members of the Condoraque community and heard their testimony. The outcome of this experience is very hopeful. The mining company has apologized and agreed to the community’s requirements. The land and water restoration plan is being elaborated by experts in remediation for mining of the New Castle University of the United Kingdom, arranged by the Catholic Overseas Development Agency, representatives of which have also visited the site.

This case is becoming a source of inspiration in Peru among local communities who do not oppose development but insist on their rights being recognized within a framework of sustainable development. The Condoraque case may well become emblematic globally as it enters into the United Nations log of best practices in keeping with the principles stated in the Rio+20 vision statement quoted above. Beyond a doubt, peace and human security are fostered!