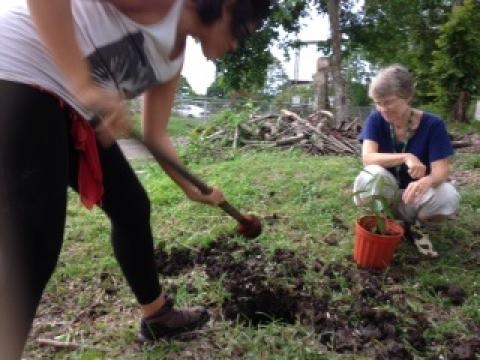 Maryknoll Sister Ann Braudis reports on her experience at the eco-spiritual retreat and study program called the Web of Life at the Maryknoll Sisters' Pastoral Center in Darien, Panama. The following article was published in the September-October 2017 issue of NewsNotes.

I traveled to Panama from New York in June to join a Web of Life retreat for international visitors organized by the Maryknoll Sisters of the Panama Region. We spent the first day of the retreat in Panama City, where we visited the new and brilliantly designed BioMuseo (Museum of Biodiversity), which tells the story of the land formation of Panama and features exhibits on its flora and fauna. The next day, we drove five hours into the remote tropical wilderness of Darien province, home to the Santa Fe Maryknoll Sisters Mission. We spent six days there.

Immediately, we plunged into the study of the biodiversity of that corner of the tropical forest, including its significance for the well-being of the planet. We examined the patterns of cultural emergence, the destructive effects of large-scale for-profit development projects and the illegal drug trade, and also the work of the Darien Mission and local individuals and NGOs.

Before dawn on our fourth day, we traveled deeper into the Darien forest to the settlement of Yaviza. Here the Pan-American Highway is interrupted for about 65 miles by impassable jungle and wetlands known as the Matusagarati. Leaving our vehicles behind, we set out in the dark into two dugout canoes with motors to handle the strong tidal waters of the river which flow to the Pacific Ocean.

While on the river, we witnessed a breathtaking sunrise and handled some challenges. First, we spotted an alligator swimming near our canoes; then we got lost and the tide turned against us; next we ran out of motor fuel and could not find a place to dock. After nine hours on the water, we were relieved to be rescued and to set our feet upon solid ground. In the days to come, this experience would become invaluable as we attempted to expand and integrate our perspective of the web of life to include the issue of human migration.

Our attention turned to the human presence in the Matusagarati with the arrival of two women from Columbia and a man from Ghana at the Mission. They had come to document the fate of five migrants from Ghana who had hoped to reach the United States. The five migrants made it to Brazil, then on to Columbia. In Columbia, they entered the jungle and began the frightening journey into Panama through the Matusagarati. Tragically, in a place on the river not far from the Mission, they lost their lives. They are buried in a cemetery in the town of Santa Fe.

The three visitors were human rights workers: Abdullah Audi Salisu from Ghana, who represented the families of the five lost men, and Ana Milena Garzoa and Yolanda Chois Rivera from Columbia, who came to Darien to document what had happened.

Yolanda had traveled to Darien before to document what had happened. Then, taking some stones from Darien, she went to Ghana, in search of the families of the five, wishing to comfort them by giving them something from the far-off burial site of their loved ones. She spoke eloquently of her conviction of the deep human need we share to stretch out our hands to those who mourn and long for warmth and a touch of humanity. While in Ghana, she met Abdullah, who came to Darien to place five stones on the graves, in remembrance of the five tenets of Islam, the faith of the men now buried in a Christian cemetery.

Ana, a fellow human rights worker from Columbia, addressed us with passion concerning the plight of migrants around the world who are either forced to flee their homelands or compelled by the simple desire to improve their lives, only to face closed borders in Asia and Europe. Their last hope is the long, perilous journey to the United States. There are no statistics available regarding how many migrants survive the journey and arrive finally in the U.S. and how many perish on the way.

Following this moving presentation, we were left with one more hike through the forest and a final view of a tributary of the river that claimed the migrants. As we met this last challenge, the impact of the story of the Ghanaians was with us; along with questions about the human civilization we are creating and our immense need to respect the web of life. The application of the retreat experience is ongoing in interlocking ways: In theological thoughts and questions raised, in the need to know the Earth where we live, and in the social and political actions we take within our lifestyles.

Faith in action: Follow the Web of Life retreat held in June in a series of online blogs, videos, and photo galleries at http://globalsistersreport.org/series/web-life. Watch a two-minute video about the retreat at https://www.youtube.com/watch?v=jdgwYR_2VDY.