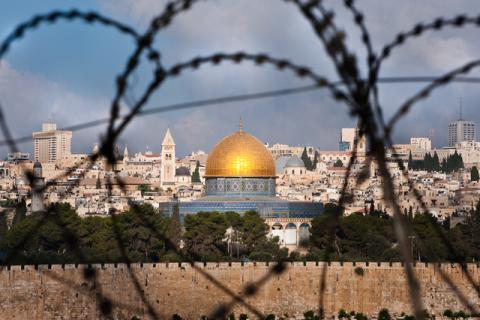 The following article appeared in the May-June 2013 issue of NewsNotes. Photo by Ryan Rodrick Beiler.

The following piece was prepared by Sr. Jean Fallon, MM, who has participated with Christian Peacemaker Teams in Hebron in recent years.

The latest news from Palestine is the April 13 resignation of Palestinian Authority (PA) Prime Minister Salam Fayyad. This leaves a big gap – President Mahmoud Abbas must now replace Fayyad or form a new government with the aim of national reconciliation between the PA and Hamas, which never recognized Fayyad’s authority, continuing instead to recognize its own prime minister, Ismail Haniyeh.

The interim government must deal with Israel’s escalating violent repression of the Palestinian people of the West Bank. In recent issues of its Weekly Report on Israeli Human Rights Violations in the Occupied Palestinian Territory, the Palestinian Center for Human Rights (PCHR) presents examples of the extent and kinds of pressure being exerted by Israeli military courts, the military on the ground and the settlers whom they protect. The problems have intensified lately with the elections of more pro-settler members of Knesset, now the most pro-settler government in the history of Israel.

During the period between April 4-10, according to the PCHR, 11 Palestinians were wounded, 59 "abducted" and 350 olive and almond trees cut by Israeli troops. Note that abducted is a term used to indicate Palestinians of all ages who are arrested without warrants or any legal basis. They are held in military prisons and if they have a trial it is in a military court with only military witnesses.

On April 5 President Abbas issued an urgent warning to regional and international parties about the intensification of illegal incidents by Israel within the West Bank and Gaza. Palestine needs the political and economic pressure of other nations to change the situation into one where peace can take shape and justice can be restored.

According to a recently released report compiled by Christian Peacemaker Teams, International Solidarity Movement, and the Ecumenical Accompaniment Program in Israel and Palestine – all groups working in Hebron – since the start of February, there have been 47 detentions or arrests of children age 15 and younger by soldiers in H2, the portion of Hebron under Israeli military control. The March 20 arrest of 27 children outside an elementary school has drawn attention to the extreme vulnerability of children living in occupied Hebron. Human rights workers in the city point out, however, that the mass arrest is far from an isolated event.

The report, "Occupied childhoods: Impact of the actions of Israeli soldiers on Palestinian children in H2 (Occupied Hebron) during February, March and April 2013," documents the alarming increase in soldiers violating the rights of children to access education, to play, to have a parent, guardian or lawyer present when detained, and to move freely on their streets. The report calls upon duty bearers [defined as state or non-state actors with obligations] to assure the human rights of children are respected. Specifically it illustrates the urgent need to bring enough pressure to compel the State of Israel to change its policy vis-à-vis children in the Old City and H2. This extends to all children in Palestine since, as occupying power, Israel is responsible for abiding by international law and for protecting the specific rights of all children.

Along with frequent incidences of land confiscation and olive/almond tree destruction, other events have caused serious concern: the lack of freedom to make religious visits to Jerusalem and the increasing attacks on holy sites such as monasteries and mosques.

To visit Jerusalem, most Palestinians require an Israeli issued permit. This is despite the fact that East Jerusalem lies within the Green Line and is considered part of the West Bank; in reality it has been annexed by Israel. Palestinians without Israeli identification cards are separated from the city by the apartheid wall and a series of checkpoints manned by Israeli soldiers.

Most Palestinian Christians from the West Bank and Gaza were denied the opportunity to visit holy sites in Jerusalem during Holy Week and Easter; according to the Palestinian Liberation Organization (PLO), Christian parishes from the Bethlehem and Ramallah areas received only 30 percent and 40 percent of the permits they requested. "The fact that so many Palestinian Christian communities are denied their simple human right to worship freely in their own capital city is unacceptable," said Hanan Ashrawi of the PLO.

Increasingly, aggressive behavior by Jewish settlers towards Christian churches and mosques occurs unrestrained by Israeli military or police. On April 19, settlers took over a monastery in a village near Ramallah and raised an Israeli flag over the building. A priest, Aziz Raei, said that Israeli settlers used force to occupy the monastery and its adjacent chapel in al-Taybeh, a Christian village in the central West Bank.

Read the entire report on "Occupied childhoods" here. Consider signing up for Middle East Notes, a bimonthly collection of news reports and updates on Israel-Palestine, compiled by Fr. Jack Sullivan, MM and distributed by the Maryknoll Office for Global Concerns. Contact us to sign up.